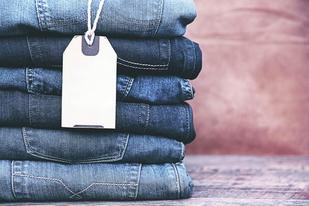 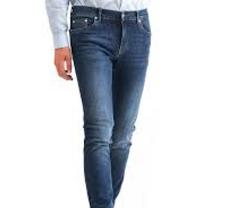 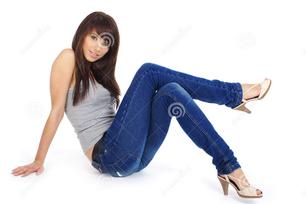 Although I have been Americanized in many ways it took me a rather long time to start wearing and getting comfortable in blue jeans.  In some sense, my acceptance of jeans made my Americanization complete.  Just like baseball, hotdog, apple pie and Chevrolet, blue jeans are uniquely associated with the American culture.

When I was growing up in India during the fifties and sixties, I do not recall seeing anyone wearing jeans.  I always associated jeans with the cowboys I saw in Western movies.  Even after coming to this country, I was not at all impressed by jeans.  I thought that it was an attire for the working class and I certainly did not belong to that class.  In addition, I was pleasantly surprised to see how affordable men’s clothing was, especially in discount stores like K-Mart and basement sections of major departmental stores like Gimble's.  Trousers and slacks were available in various styles and colors.  Who wants to wear the same boring blue jeans in the middle of all these choices, especially when jeans were often more expensive than a pair of trousers?

I thought that I looked quite respectable in a pair of pleated rayon trousers with a Van Heusen shirt tucked in it along with a shiny pair of shoes.  The entire ensemble probably cost me something like $50.  Surprisingly or perhaps not so surprisingly, all of my Indian friends also dressed in a similar fashion in social occasions and I did not stand out as a misfit.  I realized much later that this look spells out an image which might be termed “Fresh Off the Boat” (FOB)!

I spent my entire career in academia, both as a student and later as a faculty member, never wearing a pair of Jeans.  It was only when I went to work in industry that my boss’ secretary commented one day, “Basab, I do not think I ever saw you in jeans”.  That was a moment of awakening for me.  It was as if I finally recognized that, even if I had fair skin and a perfect American accent, I would not look like an American to anyone without blue jeans.

Slowly but surely a transformation of my wardrobe, from those pleated polyester trousers to blue jeans, started to take place.  Over the past couple of decades, I have worn nothing but jeans except for some special occasions when I had to wear suits or some type of Indian attire.

Apart from my desire to look like Americans so that I would be embraced by their society, I find jeans to be very appealing for a number of different reasons.  First and foremost is the fact that I do not have to iron my jeans.  I can engage in any kind of physical activity without worrying if would make my pants look crumbled or crinkled.  This also means that one can wash jeans less frequently.  Secondly, jeans are physically more comfortable. They last longer than trousers made with other materials under the same amount of wear and tear.  From a fashion point of view, jeans go with almost any style of outfits, formal or casual, from a tee shirt to a fancy sports jacket, from sandals to sneakers to dress shoes.

There are more subtle benefits.  Depending on the style, jeans can make a person look more “hip” or “cool”.  This is especially true for women who can look very sexy wearing a tight-fitting pair of jeans.  In addition, such jeans can offer a protective layer against sexual assault because it is rather difficult and time-consuming to forcefully take such clothing off anyone’s body.  Jeans typically get torn with usage at the very bottom edge, but one can then easily convert them into shorts simply by chopping off the lower parts of legs and hemming up the edge.

I have shopped for pairs of jeans over the years at a wide variety of stores and have been pleasantly surprised to see the variety of styles and price ranges in the available jeans.  My early impression of them were that they all looked alike with straight legs, front pockets and blue color.  I have spent $16 in buying “Wrangler” jeans from Wal-Mart to $175 in purchasing a fancy pair from Armani-Exchange.  I have gradually started to appreciate why it might be worth it to spend big money on jeans. It has to do with precise shape/fitting, features (fancy buttons in place of a zipper, for example) and image (fashion-conscious people can tell an expensive pair of jeans form a cheap pair, even if you cannot).  Although the terms “jeans” and “blue jeans” are often used interchangeably, more expensive jeans can be available in a variety of colors, especially black, gray and many different shades of blue.

I decided to explore the history of blue jeans on the internet before writing this essay.  I was surprised to learn that Jeans were actually created first in Genoa, Italy where these pants were worn mainly by soldiers and in Nimes, France. In fact, the name “Jeans” comes from the French version of Genoa and the name “denim” came from the French word “De Nimes” meaning “from Nimes” (a city in France).

However, it was not until Levi Strauss, a young German man, immigrated to New York where his brother had a store, and then moved to California and finally teamed up with the tailor, Jacobs Davis, that the era of blue jeans really began to take shape.  They even filed a patent on how to insert copper rivets to reinforce certain parts of the trousers.  The patent was issued on May 20, 1873, which is unofficially recognized as the birthday of blue jeans!

At the beginning the jeans were used primarily by the miners in the USA and then they became popular with the working class at large.  Blue Jeans got more widely accepted in the American culture, especially young men, after movie icons like James Dean and Marlon Brando flaunted them in movies like “Rebel without a Cause” and “Wild Ones”.  Blue Jeans gradually became an indispensable part of American life.  The USA reportedly uses 39% of all blue jeans made in the world today, while Europe accounts for only 20%. If one is asked to imagine an American, it would be difficult to think of him/her in anything other than blue jeans.  This is epitomized by Elton John in his song “Tiny Dancer” where he starts with the line “Blue Jean baby, LA lady”.

I vividly remember one incident that showed the obsession of the Americans with jeans.  I was going to attend some international business conference and training sessions in Germany with six other colleagues, all Americans, and we were all dressed formally in suits and sports jackets during the entire plane journey.  We were supposed to meet for dinner after checking into our hotel and taking some rest for a short period.  When I met them for dinner, they were all dressed casually in jeans while I felt very awkward, being still formally dressed in my suit.

I have seen many new trends in jeans during my lifetime in the USA.  First, it was the appearance of acid washed jeans and jeans having a worn-out look.  Then came the “ripped look” where the jeans have a predetermined hole at one or multiple places.  Favorite places are knee areas and thigh areas for women.  This trend is actually great for increasing longevity of the garment; even if the jeans get ripped at some place from normal usage, people might think that it is a show of fashion.  More recently, I have seen young girls wearing jeans which probably have more hole areas than areas covered by denim material, thus seductively exposing their legs and thighs.  Then there are low-rise jeans, again more appropriate for girls, which are to be worn low on the waist, exposing several inches below their navels.

Not just trousers but other apparels have been also made out of denim and become popular, such as shirts, shorts, skirts, jackets and overalls.  I must confess that I love wearing shirts made of denim, probably more than trousers.

I am also happy to see that it is not just me but all of my Indian friends, relatives and colleagues have also adopted jeans and I do not stand out as someone desperately trying to copy the Americans.  The younger generations of Indian immigrants coming to this country have embraced jeans almost as soon as they arrived. One interesting observation is that the use of blue jeans is much less common among Indian women, especially Bengali women, in this country. The more westernized ones prefer to wear tights and capris, regular pants and pantsuits or some western version of Indian pajamas.  I do not know if it has something to do with their shyness or difficulty in finding jeans that would make them look really good.

It is not just women; even Indian men also seem to have some issues against women wearing jeans. As recently as 2014, a family court in Mumbai ruled in favor of a wife who claimed that her husband’s insistence that she wore saris instead of kurta and jeans amounted to spousal abuse and the ground for divorce.

Speaking of jeans and Indians, it is worth mentioning some interesting historical facts.  During the early years of blue jeans, India supplied almost one hundred percent of the indigo dye needed to color the jeans blue.  In fact, indigo was considered to be such a profitable import from India that it was termed “Blue gold”.

A more significant aspect of contribution of Indians to the evolution of blue jeans was the use of a fabric called “Dungri” in India (“Dungaree” by the British) in making coarse attire in the Dungri area of Bombay long before Denim came into the picture. Dungaree was the precursor to Denim. One key difference between the two fabrics is that denim jeans are dyed after the garment is woven whereas Dungri is made from fabric already colored.  Even today, jeans made of dungaree are available side by side with those made from denim.

Knowing these historical titbits, I now feel proud to wear blue jeans, not just as a symbol of my Americanization but also as a tribute to my roots in India.  Perhaps you can call me a true blue-jeans baby – someone who was born in a country which fostered development of blue jeans and is now getting assimilated in a country where blue jeans is the national dress.