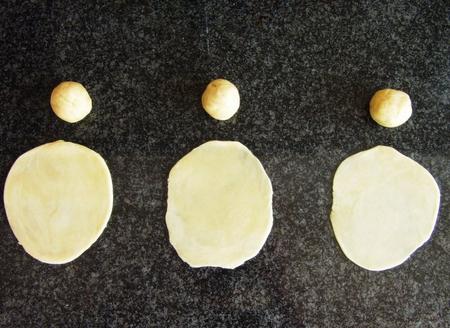 Pauline Gupta taught me how to cook rice that looks like baby's breath, sparking white, fluffy and at the same time crisp, with each grain standingon its own. She also taught me how to fry puris and make them puff up like balloons when dropped in a pan of hot oil. She showed me how to mix the flour with a pinch of salt, a teaspoon of ghee and some lukewarm water.

Nobody seems to know the secret of lukewarm water in making Indian bread. Pauline told me that if one uses warm water the dough is softer and fluffier. She showed me how to make small balls out of the dough and roll them on a pastry board with rolling pin. When I tried to do this all of my puris became maps of many countries. None had the perfect shape of the earth as Pauline could create time after time.

She also told me to cover the cooked food in the oven when it is to be kept warm until serving. Before I met Pauline I had tried to serve a nice dinner to my husband’s friends one evening, but did not cover the dishes in the oven, and what came out at the serving time were parched, dried remnants of everything I had toiled over the entire afternoon.

I was a newlywed young girl who came to Stafford, a small town in the Midlands, Staffordshire, England. My dear husband was a doctor in the health service and worked at the local hospital.

I grew up in Calcutta, India and lived in the medical school dorm for five years before getting married. I never entered the kitchen at my parent’s home because my mother never thought that was necessary. I came home on weekends, sat with my father for morning tea and breakfast and discussed world literature, sociology, anthropology and history. He took me to the museums, art exhibits, music concerts and the local parks. He told me how to rise above myself.

My mother was the strictest taskmaster I ever encountered. She would sit quietly for hours when I practiced my voice. She came back every half-hour or so to check on me to make sure I was studying steadily and preparing for Physics, Chemistry and Biology tests. She did not understand chemical equations, theories of physics, biochemical reactions or mathematical formulas. She knew that her mere presence would make me stick to the pages of the books, concentrate and grasp the concepts of science that might be obscure to her. She herself was a professor with master’s degrees in History and Education.

So I never had a chance to visit the family kitchen, where the cook produced simple, wholesome meals under my mother’s supervision.

I got married. My father-in-law was a stoic, tall authoritarian who expected women around him to spend hours in the kitchen and produce exquisite meals. Of course he consumed the lion’s share of it. I spent a few months at my in-law’s home and then proceeded to join my husband in England.

Pauline was from Wolverton, a small town near Stafford. Stafford is a small town in the Midlands, near Birmingham, the largest industrial city in the area with mostly blue-collar workers. She worked at the local laundromat in the evenings and cleaned houses during the day. She had a large family and her father worked in  a factory. Pauline dropped out of school after eighth grade.

Dr. Gupta, a friend of my husband, walked into the laundromat one night with three weeks’ load of his dirty clothes and met Pauline. Pauline offered to help. She started to starch his shirts, pressing the collars to a stiff pucker, pleating the trousers so straight down that Dr Gupta’s short stature seemed taller than real. She would bring his laundry back to his studio apartment adjacent to the hospital, put them neatly in the built-in bureau and make his bed every day before she left. She started to wash the dishes, wipe them dry and put them away inside the small cupboards in the small kitchenette. This was separated from the living room by a small counter that served as a writing desk as well as a table to serve food. She often cooked for him and packed away meals in the small fridge that would last him several days.

Dr. Gupta only liked curried food. His taste was fixated with the hot spicy, Bengali cuisine. Pauline found wonderful recipes by asking her Indian clients at the laundromat. She also watched Dr. Gupta day after day when he made a huge mess in that tiny kitchen by dropping onion and garlic skins on the floor. He fried up cayenne pepper by dropping it into hot oil and then dumped pieces of goat meat in the pan that splattered the oil all the way up to the ceiling. He always made more food than he could consume himself and  shared it with Pauline.

Pauline started to spend her nights at Dr. Gupta’s tiny studio space of a living quarter.

In the beginning she did not like how Dr. Gupta spoke to her in Indian English with an accent that was so different from her own thick Midlands accent. Slowly she got used to his accent, his smelly messy kitchen, his sudden desires for a quick sexual escapade during on-call nights at the hospital and finally his enormous loyalty and affection that she never encountered from her own British family and friends.

Months later she announced to him that she was carrying his child.

After getting married Pauline left the laundromat and her day jobs. Dr. Gupta became a G.P. in the National Health Service and bought a garden home in a nice friendly neighborhood.

Pauline had three beautiful children and three helpers: a housemaid, a nanny and a gardener. She never starched or ironed another shirt for Dr. Gupta the rest of her life.

She had a passion for cooking and entertaining all of Dr. Gupta’s friends. She never invited any of her old friends from her old neighborhood. She never saw her school friends where she had dropped out in the eighth grade. Her family occasionally visited her but envied her for being a rich doctor’s wife.

I met Pauline for the first time when she invited my husband and me for a welcoming party at her house. She often did that.

She was kind, friendly and had a soft monotone of a voice. She worked hard to cultivate this tone to hide her typical rounding sounds of the Midlands accent.

Pauline took me into her universe with ease, embraced me with warm compassionate kinship.She helped me to adjust to the unkind prickly bitter cold winters of middle England. She taught me shortcuts of household chores and tricks of simple but tasty Bengali cooking. I learned to serve my husband’s friends nice dinners with grace and never felt embarrassed about my inexperience in the kitchen.

I was a doctor in training and worked long hours and took night calls every other night. In my home in Calcutta I would never lift a finger, being a doctor, and would have servants waiting on me all day long.

Pauline empowered herself by marrying a Bengali doctor and left behind her life at the laundromat and her blue-collar family in Wolverton.

She helped me to get control of my life and taught me survival techniques in a foreign, unfriendly, racist Midlands.

Readers interested in commenting on this article should email their remarks to amitabhanj@gmail.com or debsmee572@gmail.com

Comments received from Jayashree C. on April 8, 2016:
"I've been wanting to comment on this piece but the last few months have been absolutely hectic for me.
The article delighted me because I could appreciate the situation completely - a medical student's mother not wanting to take time from her daughter's busy schedule to teach her to cook, and then the student becoming a doctor and finding that the meal she had prepared for the husband's friends was ruined because she heated the food without covering the dishes!  The whole piece was very well-written, and it fits in with the different kinds of immigrant experiences that you are trying to preserve.  I also liked the twist in the solution - an Englishwoman taught the writer how to cook Bengali food!"