While I was a child growing up in India, I was led to believe that dancing was an art form, perhaps with a religious flavor.  This perception started to form with the images of "Nataraj" and other dancing figures from Hindu mythology; it was only enhanced by subsequent exposure to performances like Udayshankar's dances, classical dances like "Kathak” as well as Tagore's dance dramas. The Bollywood movies during my teenage years gradually opened my eyes to other types of dances, especially dances performed by a large group of people together, such as folk dances (including tribal dances and Bhangra), elaborately choreographed "floor shows" etc. as well as western-style dances where body movements were used as a tool to entice someone of the opposite sex.  I also realized that dancing was considered a social custom in western societies and thought that ballroom dancing was quite romantic.  Dances like "Twist" and Elvis Presley style pelvic gyrations also came in vogue and became popular in India, especially among the local "mastans" who could amuse, if not awe, the young girls in their neighborhoods with their body movements.

Even though we gradually adapted ourselves to various American customs and cultural practices after coming to USA, dancing was the last thing on our mind.  On those rare social occasions, in some American friend's house or some celebration galas where guests were encouraged to dance, my (ex)wife and I were shy and silent observers.  This continued to be the case even after our graduation and beyond, when we permanently settled down to be part of this society, had good professional jobs, and got "Americanized" in many different ways.  In fact, in my entire twenty-one years of marriage, I danced with my wife only twice.

I became acutely aware of my handicap in dancing ability when I got divorced and entered the dating scene.  It became clear that dancing was an essential step if I wanted any woman to get in the mood and spend the night with me.  Dancing serves two very important purposes: i) it shows your date that you can express joy and passion through dancing and more generally, that you have a "wild" and uninhibited side to your scholarly and intellectual personality - something most women of all nationalities like; and  ii) secondly, dancing often serves the role of foreplay.  When you are dancing for a while in close proximity to a person of the opposite sex, and often holding that person in an embrace in a semi-intoxicated state to the rhythm of a song accompanied by some flirting, chances are you would both be aroused and there would be a willingness to complete the act, so to speak, when you go home.  In spite of such incentives, I simply could not force myself to dance.  Whenever I hit the dance floor - typically at someone's repeated urging - I was awkward and felt extremely self-conscious; I was fairly certain that anyone observing me just laughed and laughed at my moves.

I decided to take some formal dance lessons from the Arthur-Murray Dance Studio, mainly in the various steps of basic ballroom dancing.  It did not do me any good because most of the dances at bars and parties were not formal ballroom dancing.  However, I started to appreciate the sensuousness in dances like "Tango" and "Cha Cha Cha".  I also gradually learned that my fear of being a laughing stock on the dance floor was largely unfounded because no one really paid any attention to how others were dancing, and no one remembered what they observed the following day even if someone was watching.  Coincidentally, the time was the nineties and a new genre of dance music was in vogue; the songs were of very fast tempo with electronic music and a heavy dose of rap.  I still remember a couple of songs from that era: "Everybody dance now...." by "C and C Music Factory" and "What is love?" by "Haddaway".  Dancing to such beats was not difficult at all; one just had to move one's body, legs and arms in whatever way one pleased.  Still I could not do it.  The only occasion I really danced with absolutely no inhibitions was in Tokyo.

I was working at Sony and going to Japan almost every two or three months.  One of my college friends, Ashok who worked at IBM, was posted at IBM-Japan during part of my tenure at Sony.  I used to hang out with him in Tokyo whenever I had the opportunity.  Tokyo has an area called "Roppongi" which is famous for its night life.  The whole area is full of bars, restaurants, karaoke joints and dance clubs and packed with westerners at night.  One night we went there and checked out several dance clubs.  The atmosphere was surreal; there were people from all over the world, but no one knew me and no one cared what I did or how.  Music was loud, clubs were jam packed and sweating hot and there was no other choice but to dance.

I was discussing my phobia of dancing with a woman friend in San Diego during this period. She looked at me and said, "it is just not in your blood".  That was a profoundly accurate statement.  Dancing is not in my blood; it is not in the blood of most Bengalis and probably most Indians as well.  If you go to a bar with disc jockey or loud music playing from a sound system, you would see the Americans, especially the women, starting to move their waists or shoulders (if they are sitting down) if they listen to some music they like.  Just as the lyrics of the song "Everybody, dance now" said: "...let music take control, let the rhythm move you....". You don't have to make any efforts if dancing is in your blood; music will move you and take control.  The trick is to let your intellectual and emotional (except the "happy" emotions) existence go and only your physical body respond to the surrounding.  This was very difficult for me to do!  Perhaps this is why drinking alcohol helps.

It is interesting to note that many younger Bengali immigrants are not so averse to participating in dances. This is attributed to the influence of Bollywood movies which now feature very elaborate, colorful and quite sophisticated dance routines, often incorporating western dance moves. Of course, our second generation in this country is also much less inhibited than people in my age group in this regard.

Dancing can also be an expression of caring.  Regardless of our background, we all have a natural instinct to embrace our loved ones, especially on joyful occasions; we hug not only our romantic partners but also our children and parents and friends.  Dancing is a natural extension of embracing to express such emotions. In fact, two of my cherished memories are of dancing with my daughter: one was an occasion of “Father-Daughter Dancing” at her middle school and the other at her wedding reception.

I have a confession to make. Unlike most of the Bengalis of my generation I am a huge fan of Michael Jackson.  I have all of his music videos and I would often watch them even more than ten years after his death.  I sincerely believe that, even though I did not have dancing in my blood, Michael Jackson has succeeded in injecting some dance DNA into my blood by osmosis. When I listen to his music and/or watch the music videos, I feel like dancing inside.  I tap my toes and snap my fingers, even though I am still not quite ready to get up and dance.  I am in awe about how flexible Michael’s body was whenever I watch his dance moves.

Dancing also serves a very useful purpose. It is a form of exercise that can be real fun, unlike other types of exercises, and great for our health. It is no wonder that dancing and exercise have been combined in the so-called "Aerobic" exercise programs. It is also a good idea to have our daughters (perhaps sons too) undergo ballet lessons when they are kids for the same reason whether they want to become ballerinas or not.

I also have a different kind of appreciation for dancing, one from an artist's point of view.  One of the most difficult subjects to draw for an artist is a human figure, especially if it is naked or not covered up too much.  It is even more difficult when the figure is in motion of some kind.   Dancing forces human bodies to go into many different unusual postures and doing a painting of dancers would be both a challenging as well as a very satisfying task for any artist.  It is interesting to note that, even though dancing was in vogue in the fifteenth century Italy, there is almost no painting or sculpture of dancers in the Renaissance era artwork.  The reason was probably due to the fact that source of financial support for the artists came from religious sources.  I wonder what Michelangelo, who was THE master when it came to capturing various "poses", would have created if he were commissioned to sculpt or paint dance moves!

Is uninhibited spontaneous dancing some type of a primal ritual related to physical love and passion? Should I not regret missing out on this entire dancing culture, especially since I consider myself to be on a spiritual journey now?  The answer is “Not really”.  Think of Sri Chaitanya Mahapravu and all the kirtan songs and dances of his associates and disciples, not to mention all those dances during the seventies at the airports by the "Hare Krishna" groups.  Those dances with a total lack of inhibitions and a total oblivion on the part of the dancers to the surroundings are not too different from how I danced in Roppongi dance clubs in Tokyo.  Dancing is quite common in Christian churches, especially black churches, accompanied by religious singing by a choir group. Primitive religious rituals performed by ancient tribes also involved dance routines. Dance is indeed an expression of love and passion, but it is not restricted to just physical or romantic love; one can also express love and passion for God through wild dancing.

Once I tried to learn how to dance following a formal routine when I was searching for women I could date.  Perhaps now I will have to learn dancing from my heart in my search for God! 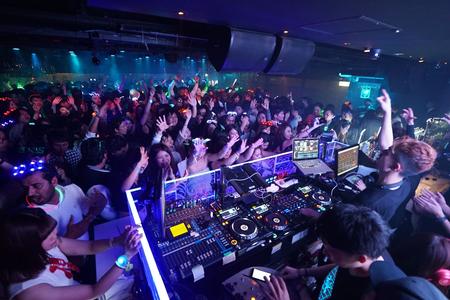