The Decision I Made

Did you ever think, "Today is just not my day?"

This day was such an unbelievable experience for Doctor Bani. Her strong faith in the Supreme helped her to journey through that date.

Thirty years ago, she practiced as an Anesthesiologist in a large community hospital about thirty miles from her home town of Aurora, Illinois. She took country roads where there was less traffic and the speed limit was higher. Doing that, she managed to arrive at the hospital within half an hour. Because her travel time was relatively short, she could take calls at home and be at the hospital in a short time, in accord with the rules of her department.

It was a Saturday afternoon. Her husband, also a doctor, was busy at the hospital in Aurora with a complicated delivery. Bani, an immigrant from India, was planning the evening dinner. She was on call that day. So Bani called the hospital and found out that the operating room was quiet. She contemplated making some rice in the cooker and some egg curry to go with it. She had started to boil a few eggs in a covered saucepan on top of the stove when the phone rang. The call came from the nursing supervisor of the hospital.

"You have to come immediately for a strangulated hernia operation. The patient is very sick," the nurse said hurriedly. Dr. Bani left her house as fast as she could. She was speeding a little when she saw a police car following her in her rearview mirror. She knew she was supposed to stop, but her concern was for her patient, as delay might rupture the bowel. She was the only one there to put the patient to sleep for immediate surgery to save his life. She was puzzled at that moment because the patient's life depended on her decision. Her decision to pull over or not was a matter of life and death of another person.  She prayed and increased her speed a little more. Now she saw two police cars following her with lights flashing. By then she was close to the hospital. Bani entered the doctor's parking lot by using her designated parking card to open the gate and quickly parked the car in her spot.

Quickly, she entered the hospital. Although Bani felt a little afraid, she knew the police wouldn't be able to enter that private parking lot. After changing into a scrub outfit, she went to the operating room to get ready for the operation. She thought that consequences of her speeding she could handle later. After all, she had a good excuse.

After the operation started, a nurse came into the room and whispered into Bani's ear, that there were two policemen in the lobby asking the receptionist about her. The supervisor in-charge told them, it was a life-and-death situation where you were urgently needed and couldn't be bothered. The policemen understood and left. Bani heaved a big sigh of relief under the mask which was not revealed to the nurse. A simple "Thank you" came out of Bani's mouth as she secretly thanked the Almighty.

The operation was proceeding when suddenly Bani remembered: she had left the house in a hurry after the phone call and forgotten to turn off the stove!  More than an hour had gone by since then. Her kitchen must have been on fire by now.

She immediately thought of her husband. Her doctor husband was at the hospital working when Bani left home. Maybe he would be her life saver. She scribbled his hospital and beeper number on a piece of paper and motioned the circulating nurse to come to her. Dr. Bani handed over the piece of paper to her and told Peggy in a soft voice, "I was boiling eggs and forgot to turn off the stove when I left home. It is an emergency. Only my husband has the key to our house. Please call the nurse at the front desk and ask her to give him the message that he has to go home to take care of it. Else send somebody with the key to handle the situation as I'm tied up here now." Peggy gave a scared look.

She left the room asking the other circulating nurse to cover. Dr. Bani got busy with her patient, leaving her house at the mercy of God. A little while later, Peggy came back and said, "Don't worry. We gave the message to your husband."

After the successful operation, Bani woke the thirty-nine-year-old patient up and took him to the recovery room when a nurse there gave her a piece of paper on which the nursing operator had written, "Your husband was busy performing a Caesarean section, but he had sent the security guard to your house with the key to take care of the problem."

Bani was too afraid to call her husband, as she might get a big lecture about her stupidity. She comforted herself thinking whatever had happened to her house, it would be taken care of by their home insurance.

Her patient did well, and his life was saved.

Nurses asked her, "Aren't you going to call your husband to find out about the condition of your house?"

Worried Dr. Bani replied," I'm going home now and I'll let you know after I see it myself."

On her way back home, she thought of what kind of confrontation she was going to have with her husband! She consoled herself with the thought that she had put a large amount of water in a big saucepan to boil only four eggs. After coming home, she smelled a little smoke. Bani noticed her saucepan with its cover was in the sink completely charred. The white eggs turned completely black and lost their shape and size too. They were stuck to the bottom of the pan. The high kitchen ceiling was not discolored. Bani thought, the outcome of the so-called disaster was not so bad after all; maybe that was only because of her faith in the Supreme Being, but also her thoughtful measures -- like keeping the exhaust fan on, covering the saucepan during the boil and keeping the stove on low heat.

Then she discovered her husband napping on the couch. Instead of talking to him or receiving a lecture from him about her negligence, Bani went quickly upstairs to pray.

Such was her life as an immigrant doctor in the USA, bitter and sweet during the 1980's 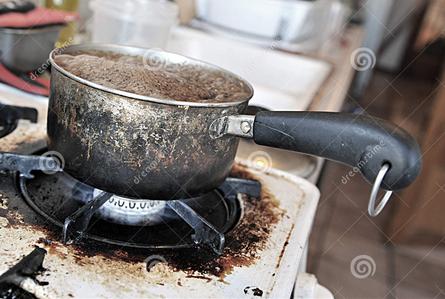