Durga Puja in the US: Beginning and Evolution
Amitabha Bagchi 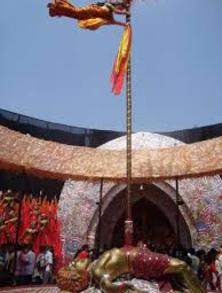 NOTE: An earlier version of this article was published in the Sept-Oct, 2014 issue of DuKool Magazine (Cincinnati, Ohio). It is reprinted here with the kind permission of Sarbari Gupta, Editor-in-Chief of DuKool Magazine.

When I came to the United States as a student in the mid-1960s, I joined a rather sparse community of Indians and (naturally enough) an even sparser community of Hindu Bengalis. As we tried to recreate the homey atmosphere with cuisine and culture, celebrating Durga Puja was very far from our minds. Those were the days when the supermarkets stocked only the very basic of Indian spices – mainly ground turmeric, cumin and coriander – plus a previously unknown-to-me but wonderful invention called curry powder that came in extremely handy for culinarily challenged individuals like me. For anything more exotic, from fenugreek to fennel seeds and the ingredients of garam masala, we had to go to select Armenian stores – Kalustyan’s in New York City, for example, or Bejian’s Grocery in Los Angeles. As for culture, it consisted of post-dinner Rabindrasangeet to the accompaniment of the trusted harmonium, which musical instrument had the uncanny habit of popping up at the right place at the right time.

Things began to change rapidly after the enactment, in 1968, of the “Immigration and Nationality Act of 1965.” There was an influx of professionals from India (and West Bengal) who were older and more mature than us students. They were often married, and sometimes even had children. Unlike the transient students on F-1 visa, these newly arrived immigrants planned to build their careers in the US and live most, if not all, of their lives here. Their arrival changed the demographics as well as the attitude and perspective of the immigrant Indian community. As their population, at least in big cities, began to reach a critical mass, there was a manifest yearning for recreating slices of life from back home. For the Bengali immigrants, the yearning focused on celebrating the most important annual festival of the community, the Durga Puja.

I sensed the first murmuring of this in 1969, when I drove with some friends to Los Angeles from San Diego to attend the Bijoya Sammelani (get-together). A group of us gathered in the spacious living room of the host family and ceremonially embraced each other, even though we were mostly strangers. This was rather different from the practice back home, where Bijoya – the last day of Durga Puja, after the immersion of the goddess’s image -- is generally celebrated among relatives and friends. Nevertheless, there was a palpable feeling of warmth and nostalgia as we partook of sweets and wished each other well.

I do not recall any Durga Puja ritual per se that year. That changed the next year, in 1970, when I drove with some friends from Champaign-Urbana to a Chicago suburb to attend a full-blown, ritualistic Durga Puja. I am generally not very religious by nature, nor am I given to an excess of emotion, but I must say I felt a strange sensation of pleasant familiarity akin to homecoming as I stood in front of the small deity surrounded by flower petals, incense sticks, and pretty designs made with rice flour and sandalwood paste.

Nineteen-seventy was also the year when the first community Durga Puja was organized in several big cities of the US and Canada. The community response was overwhelming; people came from hundreds of miles away to bask in the back-home feel and soak in the ambience. There has been no turning back ever since. Durga Puja has continued to be celebrated, without interruption, in the major US cities and has proliferated over time to suburbs and smaller towns as well. It is clear that the Bengali expatriates who started it created an enduring structure – based on a mixture of the barwari (group- or locality-centric) and home (family-centric) pujas of Bengal that were suitably modified for the American scene. It is instructive to examine the components of the structure – religious, financial, social and cultural – to see how the celebration of the festival has evolved over time and how it compares with its Indian counterpart.

For the religious-cum-ritual aspect, there were several early challenges to overcome. The first one had to do with the calendar. Given that the immigrant community had just begun their work life in America and had not accumulated enough vacation days, it was clearly unrealistic to transplant India’s tithi- (i.e., lunar phase) based four-day festival on their exact dates in the US. As an obvious compromise, Durga Puja became a weekend event, spanning one, two or three days, depending on the size and dynamics of the organizing group. The second challenge was to find the officiating priest. There being precious few trained Hindu priests in the US at that time, amateurs having the right (read Brahminical) caste background had to be cajoled and pressed into service. Finally, the ritual had to be modified and abridged to fit into the shortened time span. This was done independently by each group for its puja, based presumably on the priest’s opinion and some consensus. One fact that clearly helped in the abridgement on the fly is that the worship ritual is largely similar on the principal days of the Durga Puja.

The financial model went through several iterations. Some places instituted a flat fee for the entire festival, while others experimented with daily entry fees or even a voluntary-donation based approach without a mandatory minimum. Over time, the latter approaches were found to be either unwieldy or unworkable. So most organizations gravitated to a flat-rate plan with a suggested minimum based on the family size. (There were occasionally discounts for students.) The Indian barwari puja model of raising funds ahead of the festivities was simply impractical for the widely dispersed Bengali community in the US.

The social aspect built on its Indian roots with significant expansion. It primarily consisted of providing prasad (food offered to and symbolically blessed by the goddess) followed by dinner to one and all attendees. Such an expansive obligation was necessary in the US to facilitate a wide participation, because most attendees did not live close enough to the place of worship to go back home periodically for food and return. Local food vendors and fast food joints were not equipped to handle and serve expeditiously a huge rush of hundreds of hungry people.

The cultural model was a clear Americanization of what is popularly known in Bengal as jalsa. A jalsa in connection with a barwariDurga Puja is typically held on a make-shift, largely open-air stage a week or two after the puja days. The fare includes songs, dances, and sometimes theatre and the program is free and open to the public. In its American incarnation, jalsa gets absorbed into one or more evenings of cultural entertainment held concurrently with the Durga Puja itself. It began in the early years as mainly a musical program by the local artists. Over the years, it expanded to include invited singers and occasionally drama troupes from India. As the expatriate Bengali community has grown wealthier, the cultural program has grown huge and multi-dimensional – to include full-scale bands on the one hand and celebrated classical musicians (both vocal and instrumental) from India on the other.

I have not been to India during the time of Durga Puja for close to 50 years. Thanks, however, to the Internet, FaceBook, YouTube and the like, it is possible to get a good feel for the evolution of the Durga Puja celebration over there, and compare that to what has been happening in this country. Here I wish to comment on one area of quasi-convergence and one of divergence.

The area of quasi-convergence is in celebrating the festival on the religiously mandated days. Over the past 15-20 years, many Bengali temples and religious institutions have been established in various parts of the US. Most, if not all, of them celebrate Durga Puja on the correct tithi days as per the religious (lunar) calendar. Also, here in the United States, it has become more common for office workers to take personal days off on different religious high, holy days – such as Yom Kippur, Passover and Eid-ul-Fitr. So it is now hardly uncommon for a Bengali immigrant to take a day or two off from work during the actual Durga Puja period and help in organizing and celebrating the festival. The major Durga Pujas with the largest attendance, however, are still organized by social clubs and take place over proximate weekends.

The major divergence in approach has been in external appearance and esthetics. Durga Puja organizers in America by and large procure the images of the deities (Durga and her retinue) from India, and the religious rites are performed in spaces rented in schools, churches or community centers. The images and decorations are traditional and staid; they lack artistic exuberance or extraordinary creativity. In contrast, Durga Puja in West Bengal (and especially Kolkata) has by now become a carnival like Rio’s, where the emphasis is more on the unusual (and occasionally outlandish) decoration of the temporary structure (pandal) erected to house the deities and less on the legends and myths behind the celebration itself. Barwari Durga Pujas have become the patrons of a certain class of Bengali artists and artisans, giving them an opportunity once a year to be creative and boldly expressive. The result can be quite startling: pandals that look like the Titanic; pandals that look like temples of Bengal but made of sheaves of paddy; deities re-arranged whereby Durga floats horizontally like the Flying Dutchman, supported only on her trident that is impaling vertically a prostrate Mahishasur; an alternate arrangement of the goddess slaying the buffalo demon with a step-ladder rather than a trident, faintly evocative of the wrath of a housewife upset with her kitchen modeling contractor; and so on. Such hyper-modern art and flights of fancy have not yet found favor with the expatriate Bengali community iin America. Perhaps we disapprove of the extravagance and waste. Perhaps we find the current craze over there to be loud and tasteless. But the more likely reason is that our generation is in a time freeze. We remember the pujas of our youth in the 1960s and 70s and try to re-create those. The generation that started Durga Puja here would probably have to leave the scene before the next esthetic leap would be taken in how Durga Puja is celebrated in the United States.

Readers interested in commenting on this article should email their remarks to debsmee572@gmail.com or amitabhanj@gmail.com