The first car I owned was a 1960 Volkswagen Beetle. With its engine in the rear, luggage space in front and the battery under the passenger seat, it was indeed the “waterless wonder from Wolfsburg.” I bought the car second-hand, and, because I did not yet know how to drive a stick-shift, I cajoled a senior graduate student to go with me to drive the car from the owner’s home in San Diego to my digs in La Jolla. Just before we reached home, the car sputtered to a stop – and my heart sank. My friend and I pushed the automobile – it was very light, to be fair – to a near-by gas station, where a young and alert mechanic quickly diagnosed the problem. The car had run out of gas! An issue with that particular model was that it was not equipped with a fuel gauge. Instead it had a bottom lever that the driver could kick and turn to access an extra gallon of gasoline. Thus began my education with the idiosyncrasies of the car. I had to be forever alert about the odometer reading and time it properly with the gas tank fill-up.

The license plate of the car read “KCD 175.” Normally, I would neither care nor remember this factoid, except that a fellow Indian student looked at it and remarked, “Ah, the blind singer!” Krishna Chandra De, popularly known as K.C. De, was indeed a famous blind singer of Bollywood movies before my time. (I was far more familiar with the songs of his more famous nephew, Manna De.) Nevertheless, the comment stuck in my mind, as did (in consequence) the license plate number.

The year incidentally was 1967. For the next three years, I had a great time driving around in the vehicle. I learnt stick-shift driving on it, getting cursed at by drivers behind me when I would stall at a traffic light atop a steep incline. Its horsepower was limited, as was amply evident when it would steadily lose speed when going uphill on a persistent grade. (I used to joke that it could be used to measure the steepness of a grade!) Serious problems with it were relatively few, except for two memorable crises.

The first crisis happened when a friend of mine and I started off for Las Vegas with a few others in two cars – him driving his own behind mine. Shortly after starting, I stopped for some reason and saw my friend barrel down from behind at high speed. I panicked, certain of a rear-end crash, when at the last moment he swerved right and avoided a bang-up. He was in a state of shock and panting. Turns out both my brake lights had failed, and he had no idea the car in front of him had stopped. We had to go, slowly and carefully, to the nearest garage and get the electrical circuitry fixed before continuing on our journey.

The second crisis was in Los Angeles, when I was driving to the UCLA graduate student housing on Sepulveda Boulevard. As I exited I-405 at National Boulevard, the engine groaned, shivered and unexpectedly stopped running. The transmission had gone kaput.

I took help from a couple of well-meaning passers-by and together we pushed the car to a near-by VW dealership. After the mechanic took a look, I was told that a complete transmission overhaul would blow a big hole in my meager savings, but if I could live with a noisy first gear, the cost would be manageable with my student emolument. I opted naturally for the latter.

I was never happy with the noisy first gear. It was both a nuisance and a reminder of the LA mishap. When the time came for me to move away from La Jolla and sell the car, a young co-ed showed up with her boyfriend. They drove around in the car, and afterward the girl surprised me by gushing about how the noisy first gear gave the car a “character.” I kept mum, of course. Talk of “Different strokes for different folks!”

A decade later, I came back to California for a conference. I happened to look idly at a license plate and was struck by two things. First, the alphanumeric plate number had been expanded to seven characters. Presumably, the last method of numbering I had seen – three numbers followed by three letters – had reached its limit as well. Second, the new style was to prepend a “1” before a string of three letters followed by three numbers, so that my old VW could have a new plate number like “1 KCD 175.”

In itself, this method of expanding the reservoir of license plate numbers was hardly revolutionary. But then, showing me for the nerd I am, the following question popped up in my head: what would California do when the prepended number would reach 9, and the six-character alphanumeric string following it would be exhausted?

Ever since then, for close to forty years, I have been tracking the first digit of the license plate numbers in California autos. I have seen the digit inch up over time, going through 2, 3, etc. until, by now, it has reached 8. Judging by the letters that follow, I have a strong hunch that plates starting with the number 9 will soon appear on cars plying the California streets.

“How does any of it matter?” you may ask. And you would be absolutely right. There are myriad ways of moving forward in the 7-character alphanumeric scheme past the time when the current methodology would exhaust the three-letter-three number string following “9” as the first digit. One could replace the number at the start of the string with a letter (like “A”, “B” and “C”). One could alternatively switch the last six characters from three letters and three numbers to three numbers and three letters, and go back to prepending them with 1, 2, 3, and so on for the next fifty-odd years. It is trivial to think up other potential solutions.

My issue is not with the existence of a solution. It is really one of personal curiosity: what would the state of California do once the current system or numbering scheme runs its course? So far, on my California trips, I have been checking to see when the answer would unfold before my own eyes and provide me with child-like delight.

Except that, in my current septuagenarian state, I have grown apprehensive of my own mortality – a realization that I may not live long enough to see how California would transition to a new license plate string. That concern finally forced me to relent and search the web for the right answer to my query.

Searching the web was useful – up to a point.

Wikipedia, that trusted but untrustworthy source, had a lot of useful and interesting information. From it, I learnt the following facts that supported my random observations.

As you can see, the Wikipedia entry corroborates my personal observations. But it does not answer my key question: what string will come next once the current design of the alphanumeric format has been exhausted?

The answer is not publicly known. It appears that the California DMV has been very tight-lipped and secretive about the roll-out of their new plan, preferring to surprise the residents, I suppose. The best answer I could find on the web is from one Mr. Phillip Remaker, who seems to be another nerd like me, and whose guess is as good as anyone’s. (See https://www.quora.com/If-California-license-plates-are-numbered-sequentially-what-happens-after-we-get-to-9-and-use-up-all-possible-letter-number-combinations)

Here Is Mr. Remaker’s take on the subject:

For now, I have decided to be satisfied with his guess for an answer: a seven-digit string consisting of three numbers and then three letters followed by a single digit that will run from 1 to 9. I hope to live till the time when the transition will take place, and his guess will be proved either right or wrong. Till then, I will refrain from bringing up the topic in polite company.

I wish to make two more points before ending this essay.

First, I have been referring to California license plates for passenger cars only and not commercial vehicles. The latter have a different string on their license plates, and they have their own exhaustion issues as well.

Second, I have not mentioned vanity plates. They can be on occasion outrageously funny. Given seven characters to play with, in any combination of letters and numbers, a person has wide latitude for imaginative creativity. I show at the top of this article an image of the evolution of the standard vanilla license plate on the left (Courtesy: worldlicenseplates.com), and next to it on the right, an example of a rather clever vanity license plate. For more examples of the latter, the reader would be richly served by exploring the web. 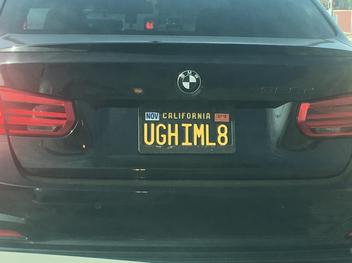 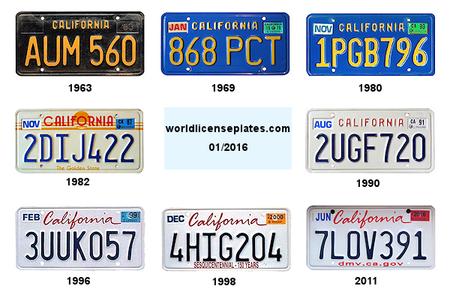