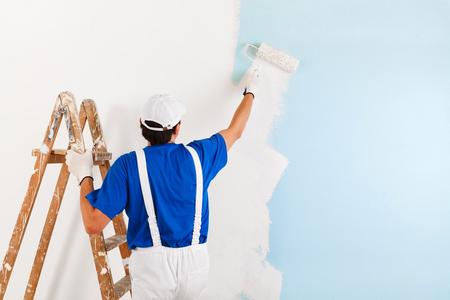 The Friendly Painter and My Introduction to Racism in America

In the summer of 1966, I was preparing to leave Maryland to join the University of California at San Diego as a transfer student. During my year-long studentship at the university, I lived in a university-owned property on the edge of the College Park campus, which was meant to house foreign graduate students. It was a simple two-story building with some 5 rooms that provided accommodation for 7 or 8 students. We were an eclectic bunch that included three Indians, an Iranian, an Iraqi, a Nigerian, and another student from somewhere in Africa. The place was pompously called the International House, even though it had neither the size nor the architectural grandeur of similarly named buildings in Berkeley or Chicago.

Sometime that summer, the university decided to spruce up the building. As part of that plan, it hired a house painter to paint the interior of the house. The painter was a young white man, in his late thirties or early forties, from northern Virginia. For some reason, he and I instantly hit it off. He liked to talk and maybe occasionally preach; I was ready to listen, intent on learning as much as I could about my new country of residence from one of its natives.

With an intervening gap of over fifty years, I can no longer remember all the things that we discussed. But two things stand out in my memory even now: his fascination with automobiles, and his distaste for inter-racial marriage.

About the former, he was quite an auto buff, and he had a special love affair with Buicks. He sang paeans to them for me, saying that he had owned several over the years and would swear by their driving comfort and reliability. While I have not owned a Buick yet, I have never forgotten his enthusiasm for the brand,

Regarding the latter, he viewed inter-racial unions as being against nature and perhaps divine law. “Have you noticed,” he would tell me, “birds of different colors do not mate with each other? Red birds only mate with red ones, and blue with blue?”

(My American friends later scoffed at the painter’s avian analogy, pointing out that birds of different colors belong to different species. This has implications for mating and reproduction, which does not exist across human races.)

The house painter taught me two words in this context, “mulatto” and “high yellow.” He disapproved of the mulattos but had a particular disdain for the high yellows. “They think of themselves as white,” he would sneer. “Such airs! Hard to deal with.”

At the time I am speaking about, the University of Maryland campus was “lily-white” – a phrase I would come across later in life – and people of mixed race were visible only on television or the streets of DC. I noticed that many people the painter would call high yellows had a skin tone way lighter than my own dark-brown complexion. While growing up in India – a highly color-conscious society – I was acutely aware of the premium the society places on fair skin, especially for women. How could I complain if lighter-skinned people elsewhere were snotty?

Shortly after my interaction with my painter “friend,” which lasted about a week, I did figure out the proximate cause for his annoyance with inter-racial unions. It concerned the case about the legality of inter-racial marriage between Richard Loving and Mildred Jeter in the state of Virginia. And it taught me the meaning of a new word I encountered, miscegenation.

Richard Loving and Mildred Jeter grew up in a racially mixed neighborhood in rural Virginia. Richard was a white man and a construction worker. Mildred was of mixed European, African American and Native American descent. She identified herself as black. They decided to marry in 1958. Since Virginia had an anti-miscegenation law in the books, the couple went to Washington, DC to get married. Shortly thereafter, they were arrested in their Virginia bedroom for living as an inter-racial couple. The couple pleaded guilty and got a sentence of a year in jail suspended in favor of exile from Virginia for 25 years.

The Lovings went to live in Washington, DC, but decided to appeal the sentence in 1963. The original judge heard the case again but refused to modify his verdict and defended racial segregation this way (per Wikipedia):

“Almighty God created the races white, black, yellow, Malay, and red, and placed them on separate continents, and but for the interference with his arrangement there would be no cause for such marriages. The fact that he separated the races shows that he did not intend the races to mix.”

This argument resembles the ornithological example advanced by my painter “friend” on the strict separation of avian coloration in nature.

The Lovings finally took their case to the US Supreme Court. In a landmark decision in 1967, the Supreme Court ruled unanimously that the anti-miscegenation laws were unconstitutional, stating (see Wikipedia):

“Marriage is one of the "basic civil rights of man", fundamental to our very existence and survival ... The Fourteenth Amendment requires that the freedom of choice to marry not be restricted by invidious racial discriminations. Under our Constitution, the freedom to marry, or not to marry, a person of another race resides with the individual and cannot be infringed by the State."

That judgment was delivered after I had left Maryland for California.

America has been grappling with the issue of race and color since before the original thirteen states decided to band together to create the country known as the United States. Anti-miscegenation laws were enacted and put in the statutes of Virginia and Maryland in 1691 and 1692, respectively. Even by the mid-twentieth century, similar laws were in the books of not only states in the American South but in most Western and Plains states as well. But there was never a federal anti-miscegenation law. Several state Supreme Courts had struck down such laws before the US Supreme Court declared them unconstitutional in its seminal 1967 decision.

Separate from the issue of inter-racial marriage, however, the United States also grappled with race in its immigration laws. The country’s attitude to immigrants has vacillated over the years between wide-open acceptance and harsh restrictions. Arguably, the first race-based restriction was the Chinese Exclusion Law enacted in 1882. The restriction was expanded to include Japanese immigrants in 1917, and further codified through numerical limits and a nationality-based quota system enacted between 1921 and 1929. Immigration from Asian and other non-European countries was virtually shut down by the 1929 law through the enactment of a quota system that sharply limited entry from the Eastern Hemisphere. This ensured that the United States remained primarily a country of European origin. But a radical change came with the passage of the Immigration and Nationality Act of 1965, which did away with the national origins quota system in favor of numerical ceilings established for each Hemisphere as well as every country therein. This statute has effected a demographic transformation of the country that is beginning to be reflected in its political order.

I am not entirely sure, but I think I have seen an impact of this change in various forms I am asked to fill out, which ask (generally optional) questions about my race. When I was new to this country, the forms typically asked me to choose from among Caucasian, Mongoloid and Negro or Colored. This used to put me in a quandary. I knew of the three broad racial classifications in India, and I was taught that I belonged to the Caucasoid race. But in America, looking at my fellow students and the majority of people around me, it felt awkward to claim membership of the same racial group. I would reluctantly tick off the Caucasian box, realizing that, after all, I was even further away from the other two classifications.

Over time, I began to see the forms morph into ones with a larger selection of boxes to choose from. Even then, my quandary was not at an end. The new racial classification that came closest to my case was Asian/Pacific Islander. This too was ambiguous, because central and south Asians look distinctly different from east Asians and Pacific Islanders. Nevertheless, I felt better about checking the Asian box. (The Caucasian box was now replaced by White, and there appeared a new box, Hispanics, which covered a wide range of skin tones for people from Cuba and Mexico to Argentina and Spain.)

Coming from India in its Nehruvian heyday, I am bewildered and somewhat disappointed by this insistence on racial classification in America. In India, it used to be the case not to ask questions about religion and caste. It is likely that things have changed, and some forms do ask a person questions about their background – meaning if they belong to categories defined as Backward Castes/Backward Tribes (BC/BT) or Other Backward Classes (OBC). (Question about religion is still taboo.) I understand that such changes have been introduced with the noblest of intent, to use India’s quota system to ameliorate the condition of the downtrodden and the less privileged population of the country. Similar questions in the US forms are also prompted by noble ideals of affirmative action to make the society less economically stratified. Even so, I still wince when I come across the question about ticking off the box about my race. Both the Right and the Left in the US pay homage to the concept of an eventual post-racial, color-blind society, except that their approaches to the goal are diametrically different. A discussion of that issue, however, is beyond the scope of this narrative.

Nearly a decade after our first encounter, I was back at the University of Maryland as a teacher and happened to see the friendly painter from a distance one day. He did not ecognize me, and I made no effort to re-introduce myself. A lot had happened in the intervening period on race relations: riots in major US cities, the killing of the Rev Martin Luther King, Jr., ugly protests to thwart court-ordered busing to public schools, and so on. I was curious to know if my friend's views on racial mixing had changed, but there was no way to broach the subject without embarrassing him and turning him either defensive or truculent. So I thought better of it and kept my curiosity to myself.