Kindness of Strangers: An American Story 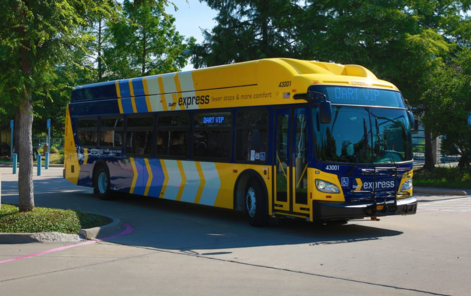 November 13, 2016, was a special day for me. I learned that day that I had received an award for literary excellence from a well-known Indian organization. My friends and family gathered at my home that evening to celebrate the news, and the ensuing party went well past mid-night.

May be because I was over-tired or over-excited, I did not sleep very well that night and woke up at 5 am, rather early for me.  After morning rituals, I had a light breakfast. With my briefcase in hand, I left home at about 6:30 am.

The DART (Dallas Area Rapid Transit) bus stop is within one block from my home. Bus #513 is a convenient mode of transportation from my home to Downtown Garland. This bus departs every 45 minutes from this residential stop, located at the intersection of Naaman School Road and Mars Drive. It takes about 20 minutes from my bus stop to the Garland Metro Rail Station. The Rail System is also operated by the DART Agency. Exactly at 6:45 AM (the scheduled departure time), I boarded the Bus #513. Soon I realized that I was without my bus ticket (“annual pass”), my wallet, my “Smart Card” (for entry into office door and computer), and my office and home keys. I had left everything at home!

This embarrassing incident happened on the morning of November 14, 2016, probably because I had stayed up late the previous night for the party. This was the first time in my life that I was facing an unfortunate situation of this type!

Every weekday morning, I am the first passenger to hop on Bus #513. The annual pass for the DART Buses and Metro Trains is purchased by the office and provided to the employees. It needs to be shown to the bus drivers and mobile ticket checkers of the trains, upon boarding and on demand. In case of failure to produce the annual pass, the passenger may not be allowed by the driver to board the bus. The mobile checker of the train may issue a violation ticket that can cause a heavy fine (up to $300 dollars) and jail sentence as well.

Anyway, upon boarding the Bus #513, I immediately realized that I was without my annual pass, wallet and photo identification cards (such as Driver's License) of any kind. So, I was considerably worried under such a circumstance. Consequently, I told the bus driver, “I am sorry. I do not have the annual pass and wallet with me right now. Please let me get off the bus so that I can go home to pick them up and take the next bus at 7:30 am”.  Looking at my worried face and hearing my trembling voice, the driver realized my plight. I continued to request the driver to let me get down from the bus right away, but he kept on driving and telling me, “Don't worry. Take it easy”. I was not quite convinced and became increasingly more frightened. So, I told the driver: “If I ride the DART train without a ticket, the mobile ticket checker may issue me a violation citation with a heavy fine. And that won't be the end of it. Even if I get by without a ticket/annual pass for the train ride this morning, it will be risky in the evening when I board the train and the bus to return home! You already know that I do not have the wallet or cash or credit cards with me to buy the ticket in the evening.”

But the bus driver kept on telling me, “Don' worry. Take it easy”. I grew more restless and nervous. On the way to Garland Metro Rail Station, there are several bus stops. Passengers were boarding and disembarking from the bus till it arrived at the final stop at the intersection of Walnut and 5th Streets. Just before I was getting off at the final stop, the driver handed me over a “Day Pass” ticket (cost = $5.50), valid for bus and train rides for the next 24 hours. He generated the Day Pass from the vending machine fare box, located next to his own seat, and told me: “I am giving you this Day Pass, valid for 24 hours from now, and you shouldn't have to worry about train and bus ride till then, to go back home in the evening”

I felt relaxed upon receiving the free “Day Pass”. The driver even asked me, “Do you need some money for your lunch today? You don't have the wallet, credit cards or cash with you. So ...”. I replied, “Thank you for your offer and kindness. I always keep some dry foods and fruits around my desk and in the refrigerator in the office kitchen/break room, just in case of an emergency like today”.

“Are you sure? Otherwise I will be happy to give you some money for lunch,” the driver asked me one more time before I disembarked.

“Yes, I am positive, and thank you so much for your thoughtfulness. Have a nice day!” I replied with a smile.

I arrived on the train platform within two minutes. The “Blue Line” metro train took off from the Garland train station immediately. I got off at my destination, the Akard Station in Downtown Dallas, at around 8:30 AM.

It took me five minutes to reach my office building. Without a “Smart Card” I couldn't get into my office on the 13th floor, because each entry door opens with an individualized code and a smart card. About five minutes later, another employee came by at the same door, and with his assistance, I piggy-backed to get inside my office.

Seemed like I was having a “bad hair” day! Then another problem appeared when I tried to log in to my office computer without the smart card!  Consequently, I called the Security Department. And at their advice, I had to personally appear there without any photo identification card.  Upon arrival, I was initially hesitant to request for a “Temporary Smart Card” without my ID card.  But the lady in charge told me: “I recognize you very well, Mr. Ray.”  “Really? How and why?”  I quipped. “'Cause you are the resident poet in our agency,” she replied with a big smile.

With her assistance and issuance of a Temporary Smart Card, I returned to my office desk   in about ten minutes.  As I recall now, my morning (till 12 noon) was spent by hopping over various hurdles.  During the lunch break, I was recapitulating the activities of the morning hours of today, especially the love and kindness of the bus driver and the lady in charge of security department.  In the evening, with the “Day Pass” in my pocket I had no trouble to return home from the office via train and bus rides.

On the following morning at 6:45 AM, I boarded the Bus #513, and the same bus driver welcomed me with “Good Morning, please hop in”.  “Today I have the wallet, ID cards, and the Annual Pass for the bus and train ride,” I told the bus driver.

As I mentioned earlier, I am usually the first passenger to hop on the Bus #513 from Naaman School Road Crist Road intersection.  So, I started to chat, and the driver introduced himself to me as Nicholas Brown.  After an initial courtesy of exchanging our names, I explained to Nicholas the reason for my daily bus and train ride to go to office and elsewhere, “To minimize and control of emissions from the private individual vehicles and to keep our environment clean, I use public transportation whenever I can.” Nicholas was very happy to discuss this topic.

Even though Nicholas was a bus driver, I noticed that he was sincerely eager to listen and learn and was genuinely kind and congenial. During the few minutes of conversation on the bus, Nicholas wanted to know what I did for a living. I replied, “I have a plain and simple life. Whenever and wherever I find time, I "scribble" poems, short stories, song lyrics in Bengali and English.”

In my response, I told him about the Bengali language, the Royal Bengal Tiger, etc.

Nicholas asked me with a big chuckle: "Where can I see your scribbling"?

At my suggestion, he opened the Google search box on his I-phone and typed in my name.

"Is this you, Mr. Ray? And, oh my gosh, you are saying that you scribble. I don't think so. I am sure, you “write” and not “scribble”. We laughed aloud together in the bus.

Bus was running and we both were approaching the destination, Garland Metro Train Station. I asked Nicholas if I could “scribble” or “write” a short story on him, about giving me a free “Day Pass” -- and use his full real name “Nicholas Brown”.

With his usual polite smile, Nicholas replied, “I am so flattered, Mr. Ray, that a person of your stature will take the time to talk about me in a story and share it with public via Facebook, web sites, and various magazines. That would be perfectly alright, Mr. Ray. I don't see any problem about giving you a free “Day-Pass” and allow you to use my real name in your story”.

“Would it be acceptable to DART?”

“Nick, OK, just tell me how do you manage to hand me over a free “Day-Pass”, like yesterday? Won’t the Account and Budget Management System Office of DART take disciplinary action and interrogate you about the discrepancy in accounting?
“Not really. Many passengers board the bus and upon paying the full fare, they do not take or ask for the ticket or “Day-Pass”. So, I was delighted to help you out in your need yesterday, and you can help someone today. God will bless you”.

"Thank you, Nicholas, and have a blessed day.” I replied.

After this conversation and getting off from the bus #513, I rushed towards the incoming train, destined for downtown Dallas.

Upon arrival in my office at 7:45 AM, I thought that it would be great if I composed the entire incident in a story form and surprise Nicholas by giving him a hard copy so that he could share it with his friends.

During my lunch break from the office that day, I composed and printed the story about Nicholas and his kindness that demonstrate American love and caring attitudes in their truest sense. So naturally my heart simply opened up, and I titled my piece as "I love Thee, Nicholas and America!"

On the morning of November 16, 2016, when I boarded the Bus #513, I gave a printed hard copy of the story to Nicholas. He was surprised and overjoyed. "I can't believe that you really composed it for me," said Nicholas. "May I request you to send it to me via e-mail as an attachment. I would like to send it to my parents and friends".

As per his request, I e-mailed this story to him from my home that evening.

"My parents and friends like your story, and they convey their thanks to you for taking time to compose it," said Nicholas each time I boarded the Bus #513.