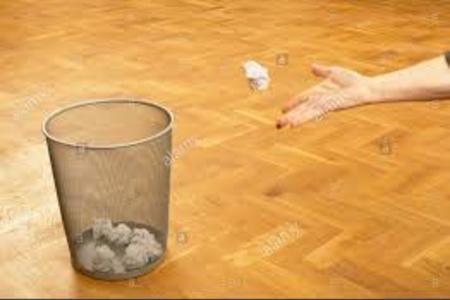 ​, A​[Editor’s Note: This is a personal story. It is also an immigrant story in that it describes how living in a foreign cultural milieu influences and modifies one’s behavioral pattern. The essay first appeared in the January 2018 issue of Ananda Sangbad, a news magazine published by Ananda Mandir, Somerset, NJ.]

In the middle-class Bengali household where I grew up, nobody had heard the term “trash can.” Waste Paper Basket (or WPB) was known as a concept but not actualized in practice. The day’s refuse would be put in designated spots – in a kitchen corner, for example, or near the lonely tap where utensils were heaped for cleaning – and collected once or twice a day by maids for disposal outside. The procedure was routine and simple.

In the suburbs north of Calcutta where my parents lived, garbage that was taken out would be typically dumped into open-air sewers running by the streets. Things were somewhat neater in Calcutta proper when I was little. In Kalighat, for example, near the residence of my grandparents, there was a wide metal drum of corrugated iron, called “dust bin,” that was situated on a plot of land in between houses. Household refuse was supposed to be deposited there, to be gathered and hauled away daily by garbage collectors of Calcutta Corporation. The sides of the dust bins prominently displayed this warning (in my loose translation): Touching garbage is a punishable offence. The dust bins had the virtue of keeping neighborhoods clean.

Unfortunately, this benevolent relic of the British Raj did not survive for long after independence. While there was a warning sign against touching the garbage inside the dust bin, there was no such warning about touching the wavy external wall of the metal drum. The local goons must have noticed the implication of the oversight, because, by the time I was ten, all the dust bins in Calcutta were gone – stolen by the goons and sold off as scrap metal. Not surprisingly, the aesthetics of city neighborhoods deteriorated sharply over the years. In Kalighat, one corner of what was once a pretty, fenced-off local park became the dumping ground of household refuse. For various reasons, its removal by municipal workers became sporadic, and trash often tended to accumulate into small hills, giving off an overpowering stench covering a wide area.

That was the Calcutta I knew and left when I came to the United States for higher studies. Coming here, I was impressed by the cleanliness of neighborhoods and the ubiquity of trash cans. Not only were trash cans in university offices and dorm rooms, but there were receptacles in place at many street corners. Casually throwing garbage on the street was frowned upon. Pretty soon I absorbed the lesson and adopted the new behavioral style. That altered frame of mind is what I had when, a few years later, I returned to India for a visit and ran into my grandmother.

One morning, soon after my return, my loving grandmother gave me some moorhi (puffed rice) to eat from a small thonga (paper cup). I ate up the contents, crumpled the thonga into a ball, and looked for a can or basket to throw it into. Naturally I found none.

I turned to me grandmother and spoke gravely. “I need something in which to pitch this ball.”

“Why, throw it out the window.” She spoke quite casually.

I was shocked, even aghast. The window she pointed to looked down on a narrow passage for people to enter or exit the house. If I tossed my paper ball, it would minimally start a litter. In the worst-case scenario, if I was not careful, it would land on someone’s cranium.

Noticing my demurral, my grandmother offered an alternative. “Throw it on the pile of unwashed utensils.” She pointed to one end of the verandah. Pots, pans and plates – encrusted with dried food – were jostling with each other next to a small heap of coal ash for the maid to scrub and rinse and return them to a pristine, cleanly state. To throw my paper ball there seemed unaesthetic if not revolting.

My grandmother noticed my furrowed brow. By now she was getting exasperated with her fastidious grandson. With an irritable air, she went to a pail of water and threw its contents down a drain. She brought the pail to me, plunked it down and huffed, “Well, now, here you have your waste paper basket.”

I instantly knew what it meant. Water was something of a precious commodity in the upper floor apartment where we were. It had to be hauled from the cistern on the ground floor. Sometimes, when the Corporation water supply was low, my grandparents had to pay a bhisti (water-bearer) to fetch water from a tube well on the street. For her to waste so much water to humor me (and my whim) was acutely embarrassing.

I went to an open window and threw out my crumpled thonga.

I was reminded of the episode with my grandmother last month when I was at a fancy hotel for a friend’s son’s wedding.

The wedding ceremony had ended, and guests were filing out of the hall. There were a few dry snacks on a table outside, kept there for people to kill the time between the religious rituals and the hors d’oeuvre. I picked up a candy and, unwrapping its plastic cover, put it in my mouth. Then I began wondering what to do with the wrapper in my hand.

Like that thonga of yore in Kalighat, I looked around for a trash can and found none.

This was indeed a big surprise. The cleanliness of the place – the spanking white table coverings, the sparkling crystals, well-attired attendants – seemed to imply that a trash can there would be an unwelcome eyesore.

But what to do with the refuse in my hand? I walked around aimlessly for a while. Finally, in desperation, I approached a well-dressed attendant and explained my predicament.

He smiled with understanding and put out his hand. I deposited it on his cupped palm and thought of my grandmother’s emptied-out pail.

[Post Script: On my most recent trip to India, I found trash cans in practically all homes. A vendor at Lake Market tried to persuade me on two occasions to buy plastic trash can liners. One pleasant surprise was to see many trash cans in Howrah station – including a colored pair on a platform: blue for non-biodegradable trash; green for biodegradable trash.]

Comment received from Pabitra S. on February 18, 2018:
"Your story reminds me of an incidence. This happened during early 1990’s. We were living in Connecticut then. Our mutual friend, AB,  was was staying with us along with his friend SC.. AB was a big shot in the college and university teachers association in West Bengal, and SC was a high level  minister in the West Bengal government (CPM at that time). I took them sightseeing in NYC. We were going to get on the ferry, I think . There was a coffee vendor, and we all bought cups of coffee. SC finished his coffee and threw the cup in the water. I was mortified but there was no one around to see. I had a hard time explaining the problem to my distinguished guest."

Looking for a Trash Can