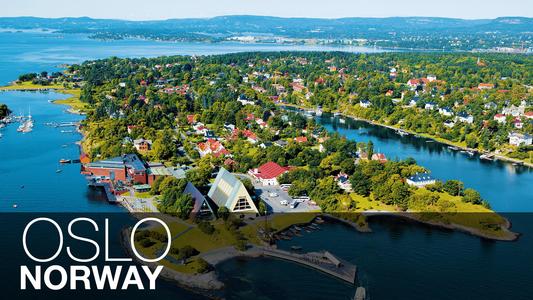 Norway or the Doorway:
A Saga of Survival During an American Recession

In early 1980, the engineering firm I worked for conducted massive lay-offs resulting from sudden cancellations of a huge number of projects that came into being in the wake of OPEC’s oil embargo. The entire work place environment became very tense and somber, so much so that some employees cancelled vacations or even postponed their weddings. Fortunately, there was still a glimmer of hope in some opportunities for overseas assignments in remote locations like Oslo, Norway. Management asked a few people, including myself, if we would be interested in relocating to Norway for a long-term project with an unspecified duration. However, the prospect of relocating to a place like Norway was not remotely appealing to any of us. In those days, Norway was perceived as a cold and obscure country near the North Pole. I really did not want to uproot my whole life here in New Jersey, especially being that I had two little daughters to think of. I sat on the decision for a couple of days.

Meanwhile, somebody at the office put up a poster on the bulletin board saying, “Norway or the Doorway”. Seeing this struck a realistic chord in my mind.  After all, going to Norway and keeping my job was definitely better than the alternative of facing a lay-off and relying on unemployment benefits to get by. After thinking long and hard, I accepted the offer to go to Norway. One saving grace was that in those days American companies offered very lucrative benefit packages for long-term foreign assignments. My package consisted of free housing and medical coverage for the whole family, free schooling for the children, and free shipment of my personal belongings and car from New Jersey to Oslo.

On October 15,1982, I left for Oslo with one of my colleagues, an American gentleman. I was first going to get settled in Norway on my own. My family would join me later once our housing was made available. We landed in Oslo airport and walked through the tarmac, and I was fully prepared to face a cold blizzard with my heavy winter coat. To our great surprise, it felt like a mild winter in New Jersey, which was a great relief for us. The coldest temperatures were around 27 degrees F, so it was not a huge adjustment for us. After reaching the hotel, we decided to eat dinner at a nearby Chinese restaurant, which seemed like the safest choice. We were quite surprised to hear a Chinese gentleman who was our waiter speaking fluent Norwegian. Luckily, he spoke English with us and from that point on we ate dinner there regularly until our families would arrive a couple of months later. Gradually, our myths and misconceptions about Oslo began to wither away. Everyone in the Design and Engineering office in Oslo spoke English, especially since our London office was managing our project on North Sea Oil Drilling. In general the young generation could speak English very well. Though the older people did not, they were always very nice and helpful in finding someone who could answer any questions we had. Also, since Norway had opened up their doors to immigrants, people from around the world, especially from third world countries such as Pakistan started to arrive in droves. This was a huge advantage to us since we did not have any trouble finding Indian-Pakistani grocery stores.

Getting acquainted with Oslo and Norwegian culture

Oslo was a well-planned city, a thriving multicultural urban hub with broad roads, rows of small stores and surrounding hills. Norway is famous for its fjords, which are long narrow arms of the sea bounded by high cliffs. There was one such fjord in the city aptly named Oslo fjord, which I used to pass every day on the way to work. It was a panoramic, breathtaking view during both summer and winter.  The basic mode of transportation in the city was by tram, bus and local train. In the evenings I used to stroll around the city with my colleagues, in search of the best stores, supermarkets, restaurants, pubs and fast food places. Soon the housing management found a modern apartment for my family in the heart of the city where we would stay through the end of winter. Later we were given a beautiful house on top of a hill during summer.  After my family joined me, I enrolled my daughters in a British school since there were no open spots at the American school. As winter progressed it started getting dark around 4 P.M. My wife’s days were spent bringing our daughters to and from school, cooking, attending free Norwegian language classes, and occasional shopping trips with other Indian housewives. There was nothing much to do at home at night, except to watch some old episodes of American T.V. series such as, Dallas which was very popular among Norwegians. Since the price of food was very expensive in Norway, we would sometimes drive to quaint, picturesque towns in neighboring Sweden to buy groceries and chicken at half the price. The highways were very smooth, even equipped with heaters at certain intervals to heat up car engines during very cold weather.

Meanwhile, I met some Bengali fellows who like me, came on assignment from our London office. One day I received a call from a senior Bengali fellow who was a longtime resident of Oslo named Nirmal-da. He and his wife invited us to his house along with some other Bengali families. From that point on our friendship grew, and we started to have weekend Bengali adda sessions on a regular basis. Towards the end of the winter, we started visiting other Scandinavian cities such as Copenhagen in Denmark, Stockholm in Sweden on weekends. We found an overnight cruise from Oslo to Copenhagen with a reasonable fare. We were able to transport our car on the cruise ship, which allowed us to drive around Copenhagen and visit some of the common tourist attractions. The next trip was to Stockholm from where we took the Viking Line Cruise to Helsinki, Finland along the frozen Baltic Sea.  I still remember a spectacular sight from the deck of our ship cruising along, breaking apart huge chunks of ice with its rotary breaker and pushing the ice away on both sides with its large arms. On the return journey back to Stockholm, the ship leisurely cruised along the east coast of the Baltic sea, very close to the shore lines of the Baltic countries Estonia, Latvia, and Lithuania. We had a majestic view from the ship of state buildings, churches, beautiful roads and houses.

If Winter Comes, Can Spring Be Far Behind? (Percy Bysshe Shelley)

April and May are considered the spring season in Norway and the days started getting longer. We started visiting treasure troves of Oslo such as the National Gallery at the art museum, and the world famous Frogner Park, the largest sculpture park filled with sculptures made of bronze, granite and wrought iron representing human emotions of pain, suffering, joy and ecstasy. We also visited the Viking ship museum, the Royal Palace for King Olaf of Norway, and many other famous sights around Norway.

The summer season normally lasts from June through August, with July being the hottest month with average temperatures around 64 degrees F. The nights became shorter and shorter and sunlight remained way past midnight for a total of about 20 hours a day. This is why Norway is known as the “Land of the Midnight Sun”. The summer strikes a different rhythm of life in Norway with mind-blowing natural scenery and a sweet touch of sunshine. It is like living in paradise where the light never goes out. Our daily routine included a stroll near Oslo fjord, Frogner Park and the hills surrounding the city. We took the most scenic train journey from Oslo to Bergen, the second largest city of Norway. The train tracks went up and down the hilltops along the way. We saw the beautiful Sognefjord and waterfalls from the top of the hills. Finally, we ended up in Bergen station and this scenic train journey will forever stay in our memories. We were also able to visit several other European cities such as London, Paris, Amsterdam, Hamburg and Moscow during our stay.

Though we were happy to stay in Norway as long as possible, we were curious to know about the situation in our office back in the States. We were happy to learn that the situation and the economy were improving. Soon, it was time to say goodbye to Norway since our assignment was coming to an end.   When we returned to New Jersey, we felt very relieved to learn that our company had secured some new projects. My experience in Norway left a long lasting impression on my life, not only because of its mesmerizing natural beauty and delightful culture, but also for coming to my rescue during a troubling American recession. As they say, everything happens for a reason and living in Norway gave my family and I the opportunity to discover a new culture, visit many different countries and precious memories to last a lifetime.