This article stresses the urgency for social integration and political assimilation for the Indian-American immigrant community in North America. This is an important step that is necessary for the benefit of the future generations of the immigrant community.

To emerge out of the dominance of an alien environment and the barrage of unfamiliar western customs into something meaningful and tangible, the estranged Indian Diaspora celebrates a long string of religious, cultural, and social activities every calendar year. These performances and functions organized by the Indian immigrant communities across the United States recreate a ‘homeland’ – a memory and identity.

This practice is important and it flourishes in abundance among the members of this uprooted Diaspora precisely because none of them can afford to take their roots for granted.  The vitality of such efforts is born of a marvelous communal solidarity among the first generation immigrants even as the nostalgia for the homeland is awesome.

The vitality of these parents of the second generation children is often seen to derive from professional accomplishments and the intimacy of interaction with the members of their ‘own’ community.  They are drawn to each other by a spontaneous condition of affiliation to and physical separation from their ‘homeland’.  It invokes a vaguely powerful relationship drenched in primordial passion, but this very passion is what lends an imaginary character and a false sense of conviction, belonging, and a comforting identity to the Diaspora.

The magnificent Indian regional cultures and performing arts, the love of beauty and life combined with a longing for something beyond life itself, which is deeper than the materialistic American milieu, epitomize the traditional cultural heritage that the Indian-American community is trying to maintain in order to pass on the same to their children effectively.  But it also has a propensity to invent an imaginary culture of India in this adopted land, thereby defeating the sole purpose, which is appropriately passing on the heritage to their children.  Many second-generation children strongly feel that these programs are geared towards their parents and offer very little for them to relate to.  This leaves the second generation in disarray and, perhaps, forces them to search for an identity, which is different from what their parents envision.

The industry of these parents and their relative affluence often seem to have turned the locals against them, making them a visible target for fanning latent hatred and jealousy.  Indian residents are often taunted and harassed by white, black, and Hispanic youths who are intolerant of their apparent ‘foreignness’ and their obvious economic ‘success’.

This is where the foresight and aspirations of Indian-Americans, who are willing to overcome old cultural barriers and narrow perception of collective interest, are of significance.  Such aspirations should not only be national but be also ‘International’ in content.  The foresight for their future resides in ‘internationalism’.  The community has to play a greater role in the wider socio-cultural and welfare processes in the US and not be solely oriented toward national politics in India.  The process should be ‘self serving’ and will provide for ‘acculturation’, thereby, gradually neutralizing the ‘misperception’ of those who object to their alleged ‘foreignness’.

The collective and shared community conscience is no longer based upon any narrow nationalism or group interest to hang together.  It has developed out of interaction and a genuine willingness to relate to one another.  Most immigrants in their adopted countries inevitably form different ethnic groups and collectively act for various purposes, in spite of their internal differences. However, some Indian-American communities, as I see them, are different in their identity and articulation.

As in Lehigh Valley, Pennsylvania, the Indian-American community has wonderful accomplishments to its credit including a deep involvement with local welfare and community service activities such as:  labor services to the well known ‘Habitat for Humanity’, providing food for the homeless, raising funds for the Art Council, contributing funds toward the renovation of an opera house, offering educational programs at institutions, donating funds toward local charity, developing and participating in “Adorning India” program for local art museum, participating in local Musikfest, Mayfair, multi-cultural activities, etc.  The Indian-American Association of the Lehigh Valley, being thus involved in local welfare activities, seeks to relate to their American neighbors in ways that can impress any observer.

Many parents, here in the Lehigh Valley, encourage their children to relate to others, in order to learn from and understand people better.  I think, this might not only shift gainfully the perception of the Indian-American community and its future but also will equip our children with hybridized talents, which will be necessary for their survival in the 21st century.  This will empower them with a unique sense of belonging and interaction, even though many of their parents struggle between returning ‘home’ and ‘staying-on’.

For many Indians, internationalism and multiculturalism are not in the air without roots or anchorage.  It can well be traced to their own multicultural composite tradition.  It is that tradition of multiethnic understanding which the community leaders may seek to bring forth, behaving not just as skilled immigrant professionals or entrepreneurs, but also as an integral cultural vanguard of the multicultural American citizenry.

An association representing Indian-Americans should provide the best nexus for ‘acculturation’, ‘mainstreaming’, and ‘social integration’ by adopting appropriate missions and by engaging themselves in a suitable range of activities -- from positive political influence to social and cultural involvement.  For instance, Indian-American Association of the Lehigh Valley strives for and has accomplished good success in the acculturation process by adopting the following mission:

The community received spontaneous commendations on their unique but prudent approach.  The association’s new activities did not go unnoticed by the media.  Clearly, this new direction was considered unique and a trendsetter by many.  The local administrations here in Lehigh Valley, Pennsylvania, wished that other ethnic organizations would emulate similar objectives for their associations/organizations/groups.

Many amongst us argue, implicitly and explicitly, that because of the Indian-Americans’ special attachment to their homeland, culture, etc., many Indian-Americans residing here have been somewhat reluctant to make what seems to them to be a final break from their past and culture, etc. and become US citizens.

No one can exist in a vacuum.  Everyone is affected by the pulls of various centrifugal forces.  The total complexities of relations between human beings and the society are known as politics.  Recognizing this as a reality, a community will do extremely well by playing a positive role.  ‘Politicalization’ is a necessity Indian-Americans cannot afford to deny any longer.  It seems appropriate that an organization devoted to just this aspect, striving for the Indian-Americans ‘political assimilation,’ has become an urgency – a sine qua non for the continued success of the community..

By understanding and participating in the process we will enrich ourselves, help others to understand us, and through that interaction, we will understand others better.  I am certain that this will help alleviate misinformation and misperception.  By adopting appropriate steps and conducting suitably, any ‘first generation’ immigrant can shift the perception of those who object to their ‘foreignness’.

I think of India – how her beloved multicultural legacy is enriching local culture and ‘acculturation’, when I observe the Indian-American children in Lehigh Valley, Pennsylvania, staging hybrid performing arts to large local audience and engaging in the local welfare process with great vigor.  Their empressement toward everyone gives them identities related to the ‘mainstream’ America, and I see the bright future of the Indian-American community flowering before me. This holds many promises for US.(An earlier version of this article was published in several newspapers, both in the USA and India, such as India Abroad, News India-Times, India Tribune, The South Asian Times, and Indian Observer, New Delhi)

Note: Readers interested in commenting on this article should email their comments to amitabhanj@gmail or debsmee572@gmail.com 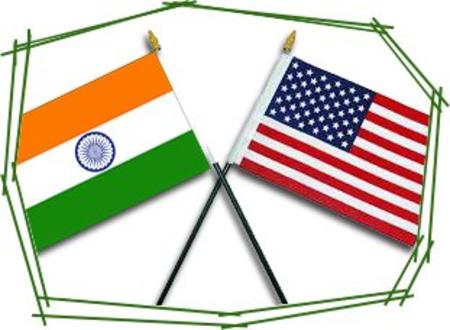