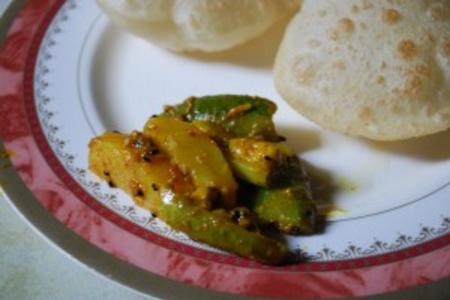 There are two schools of thought among the immigrant Bengalis in this country about what they should do with their inherited traditions of Bengaliculture, not just the language but also literature, performing arts, food habits, formal and informal outfits, spiritual and religious practices and so on.  One group believes that our culture is so strong and unique, and the Bengali language so sweet and powerful, that we must make every effort so that our children and their next generations are intimately familiar with them.  We must not only teach our kids the Bengali language, we should encourage them to learn how to sing in Bengali, how to dance to Tagore dance dramas and imbibe the significance of the traditional Bengali values in every aspect of our social life.  On the other hand, there are others who think that, since we have already made the decision to uproot ourselves from India and dug our stakes in this country, any such effort would eventually be futile.  We might force some Bengali ways onto our (second generation) children but after that their children would grow up just like any other kid in this country and would have little or no interest in Bengali traditions.  This group believes that our emphasis instead should be on how to get assimilated into the American culture and society.

Fortunately there is a middle ground.  I believe that our emphasis should not be on the promotion and spreading of what I call the “pure Bengali culture,” but instead we should examine how our culture can influence the mainstream American culture.  In order to make my point, let me start with a simple element of our culture: food.

Suppose we want to promote a dish consisting of “luchis”, “daal” and “begun bhaja” (fried eggplant) in USA.  Of course, this is a very traditional favorite meal among Bengalis and is included in almost all festive menus as a first course.  Our first instinct might be opening a “Bengali snack” food stall or something like that and try to sell this to everyone.  Although Bengalis would love such a snack, it is not clear how many other Americans would try it or like it even if they try.  Even the Bengalis may not be regular customers because they can prepare this food at home themselves.  So the long-term financial viability of such an endeavor in a business sense is very much in question.

On the other hand, suppose we introduce an item in an established deli or sandwich shop (by somehow collaborating with them) which is really luchi/begun bhaja in disguise.  For example, we can lightly fry tortillas in oil and make a wrap by rolling these tortillas with fried eggplant inside and perhaps with a touch of some spices.  Daal can be served as a side item like a soup and the whole package can be given some catchy name like “Royal Bengal Roll” and see if sells.  The advantage is that, even if it does not sell, the sandwich shop can still continue to run on its own merit with other products. On the plus side, if it gets popular, one can think of offering other food items incorporating the same philosophy, for example by introducing a mutton wrap or a cauliflower wrap, and chances are other sandwich places would emulate it.  Gradually, this can enter the mainstream menu in much the same way as taco, pizza, egg roll, gyro etc. have.

Now let us look at more sophisticated cultural items like music.  We have a tendency to exclusively teach and preach our kids Rabindra sangeets or perhaps classical Indian instruments like sitar.  While some kids may get very good at it, it is unlikely that such music would be universally popular among the second generation children, and it is almost certain that Americans would not appreciate them (although, to my point, George Harrison made some progress in making sitar a part of more mainstream American culture by including it in the Beatles’ songs).  In spite of our best efforts, our admiration for Tagore songs may not spread to our subsequent generations.  Now consider blending Rabindranath’s tunes with typical western instruments like guitars, violins, pianos and drums or take his lyrics and sing them in a totally different style.  In fact, I understand that some of these modifications are already happening among the young people in India after the exclusive rights of Vishwa Bharati on all of Tagore’s work expired.  I bet that our children and grand children might be intrigued by them and even bring such creative work to the attention of their teachers and classmates at school.  It does not end with Tagore songs.  Bengali music directors like Salil Chaudhuri and Hemanta Mukherjee have created numerous memorable tunes with emphasis on emotions and simple but profound lyrics which could be universally appealing (of course, with an appropriate translation of lyrics).  In fact, a punk rock group named “Mr. Bungles” performed their version of “Ei raat tomar amar…” at the 2000 Bizarre Festival.  Although they deliberately distorted the song in order to make it weird and also they did not know how to speak Bengali, their rendition illustrates my point about the potential universal appeal of Bengali tunes.The same can be said about how we dress.  What is a very traditional Bengali outfit for a woman?  I would say it is a white sari with  bright red border .  If a woman wears it coordinated with a big red “teep” (circular dot on forehead) she instantly brings an aura of motherhood, divinity and purity – not very common at all in any western attire.  Now imagine designing a western style white long dress with similar broad red borders, perhaps coupled with a matching red head-band of some kind.  I do not know if the women in this country would jump at buying such an outfit but it certainly would provide a very unique look and carry a Bengali influence.  There are also plenty of opportunities to introduce Bengali influence in women’s dresses including cotton textiles with simple rural design, gold threads in more elaborate and expensive dresses etc. I also often wonder if “mini-saris” (saris whose lower ends terminate at the knee) that I saw Saira Banu wear in the movie “Shagird” many decades ago would catch on if marketed here.

Bengalis can make contributions on how women decorate their bodies.  “Alta” (a red nail polish like liquid) used to create a border around the feet could potentially be popular in addition to traditional jewelry.  While the practice of making a “khopa” with hair is known here, Bengalis can show their unique styles in hairdo and hair ornaments.  Once again, it is not wise to open a store just dedicated to Bengali or Indian styles, but rather offer them as part of the offerings of a styling salon.  Use of henna is already quite popular.

When it comes to literature and performing arts, I have no doubt that it is a futile effort to publish magazines full of traditional stories from Bengal or perform dramas which were considered to be “hits” in Calcutta.  Life here is different and so are the values.  While such stories might give us, the first generation immigrants, a sense of nostalgia, our children would not be able to identify with them and not likely develop a huge interest in reading them.  On the other hand if we can write stories, create dramas and movies about lives of Bengalis in this country, their struggle between two cultures and their evolution to become a true part of the American society, such accounts would not only be interesting to our next generations but also to all Americans who might be curious about Bengalis.  Some writers like Jhumpa Lahiri have already shown considerable promise along this line.  In our creative work we can certainly highlight our unique values: emotional bonds, financial astuteness, emphasis on education for our children, commitment to marriage, responsibilities towards our parents etc. which can have a positive influence on the readers.

We can perhaps also try to introduce some Bengali influence on paintings, sculptures and other such art forms.  Images of religious figures on ceramic plates (“patas” in Bengali) are typical Bengali art items and so are all the icons of Gods and Goddesses built from hay and clay.  Perhaps we can construct not just religious figures and paintings, but all kinds of images following these techniques, especially “temporary” figures of famous people for political or other occasions.  Decorating festive venues with “alponas” drawn using a liquid-y paste, as we do in Bengal, can have universal appeal everywhere.

On the philosophical and religious front, Swami Vivekananda impressed the Americans with his Bengali views about Vedanta more than a hundred years ago; why can’t we carry on his mission?  However, I believe that if we dwell on the difficult language of scriptures and rigorous rituals, perhaps inviting some swamis from Ramkrishna Mission or Vedanta Society, we are not going to attract much American interest; but imagine someone making a presentation at a church at the invitation of the pastor there on the concept of the similarities between Christ and Krishna; that might draw a huge interest.

If someone asks me about what I miss most from the Bengali culture in my life in USA my answer would be “adda”.  The concept of “adda” is unique to the Bengalis; it is just a way of passing idle time in discussing mostly meaningless topics for hours while forming a bond among friends.  I have not seen anything quite like this in this country.  Of course, there are casual discussions at parties and bars; but they tend to be more formal simply because the wives are present and also there is always a time constraint.  Discussions in a bar are often specifically geared towards hunting for women and the presence of alcohol adds an element of inanity.  Even on college campuses here I have never seen a group of students vigorously engaged in a discussion about politics or literature in the cafeteria in the same way as we spent countless hours in the College Street coffee house and the like.  However, I have seen regular gatherings of old retired people at places like McDonald’s discussing subjects like Medicare and real estate taxes.  The sight of teenagers “hanging out” with their friends in malls and parks is also very common.  So the inherent human tendency to bond with others through meaningless discussions exists here too.

The key feature of adda is that it is strictly a discussion and therefore passive.  There is no implicit or explicit goal of doing anything together; not even going to a movie together or playing a game and certainly not smoking pot or drinking alcohol.  I believe that if this concept of “adda” can be introduced among the young people in the mainstream American culture, there can be some social benefits, whether the concept is considered as a “Bengali influence” or not.  For example, kids can learn the value of friendship and the innocent ways of expressing their opinions about various things; they would realize that interpersonal face-to-face interaction is a key part of a more complete development of their personalities, compared to chatting with them on social media.  They would feel less isolated and less apathetic about what is going on in the society.

The bottom line: if you want to promote Bengali culture in this country, get the Americans involved and see what they like!  Concentrate on what they like.  In this way we can introduce a permanent influence on the mainstream behavior and that is what I would call “promotion of Bengali culture”.

Readers interested in commenting on this article should send their remarks to amitabhanj@gmail.com or debsmee572@gmail.com