Way back when I first visited the US as a Rotary Exchange Program group member to Pennsylvania representing my home state in India, I was categorically told during the orientation process: "Be yourself; Americans like it." I was reminded of Oscar Wilde: "Be yourself; everyone else is already taken." And I was determined to be myself, not that I could be any different even if I tried to because faking isn't my cup of tea. I was determined to be surprised by the apparent differences that a new culture could offer, and boy wasn't I amazed every step of the way!

To begin with there was salad!

We would be invited to Rotary lunches and dinners in classy homes, plush restaurants and sprawling country golf clubs and every time before anything else there would be a sea of greenery served in humongous bowls. I would stare at the color coordinated, multihued repast in front of me, and tried not to wilt in disappointment while all my Rotary hosts hungrily devoured the garden on a plate with great relish. I had no idea before I came to this country for the first time that salad greens comprising lettuce, arugula, and baby spinach could be eaten raw. I had never seen these Butter heads, Romaine hearts or Iceberg leaves ever before in Jamshedpur, my tribal-industrial city in eastern India. Arugula had been unseen, untasted, unheard of, and my mother had always cooked spinach chopped with eggplant cubes for all its vitamin content. For someone brought up on leafy greens cooked till all their nutrients were mercilessly annihilated, salad consisted only of cucumber, tomatoes, and onions cut in roundels and dumped on a plate without the hint of any dressing or seasoning. So the entire gastronomic process on American soil sadly seemed to me the exact equivalent of chewing the cud, and made me feel apologetically bovine.

Now, a fellow Pennsylvanian poet from Philadelphia, Joseph Auslander might have been envious of the cow in his poem, "In Envy of Cows", because "they tasted the edge of August", but I wasn't sure I could agree with him. He might have envied them in their more bucolic setting, more bucolic perhaps in the early 20th century than in its last throes, but I was in no mood to enjoy or envy my creaking, complaining, aching jaws severely tested from all the chewing of raw vegetation and a leaking belly later on as a consequence of it. My father used to say with the famous mischievous twinkle in his eyes that cows in India are sacred because they appear to ruminate.  He meant of course that they didn’t have the required tool to ruminate and hence their sacredness was questionable. But there I was ruminating as well: how could this non-salivating dish do any good to the human health improving endeavor when it was so bland, tasteless, and unappetizing? I was flummoxed to say the least. Salads are ambrosia to the Caucasians raised on meats of all kinds, and for a good reason too, I learnt later on. But during those harrowing six weeks I hated salads, mealtime, and myself for agreeing to expose myself to such unimaginative culinary skills, all in the same order.

I was certainly in a pickle.

A decade later when I came as a bride to New Jersey, I used to be initially petrified to be offered salad as part of the entree whenever and wherever I was invited by friends and family as welcome to my new home. Mealtime was Horrortime. Seriously, not again, I panicked. And the nonchalance with which my husband thrived on chicken salad, tuna salad and a million others resurrected my worst fears which had been blissfully buried in the intervening years back home in India. Salad, he told me, was the key to good health and happiness since all happiness logically stemmed from a sound body and a sound mind, which in turn traced its origin back to the flushing of toxins, a direct offshoot of a salad-rich diet. I had unwittingly stirred up a hornet's nest yet again. “Would I ever learn my lesson?” was my woeful refrain.

Needless to say, I have since evolved -- thankfully.

Salad is a way of life for me now for a host of reasons. I can make an absolutely mouthwatering one  in a jiffy with juicy summer fresh strawberries and mandarin oranges, crunchy honey crisp apples, pine nuts and walnuts, healthy sprouts and pomegranate and sunflower seeds, tart dried cranberries, succulent grilled meats (pre-marinated overnight in all the taste-enhancing spices and yoghurt), and of course lettuce, baby spinach and arugula thrown in for good measure -- drenched in olive oil, lemon juice, salt, pepper and a dash of sugar (the subtle naughty Bengali culinary detail and the secret ingredient of course) -- garnished with feta cheese, and voila, this is something to die for! It isn't just something to dredge the insides of all the "unwanteds", but a gastronomic delight! A riot of flavor and texture teasing the tongue before the actual digging into the spread to follow; setting the mood and the tone for the final feel-good feeling.

I love salad now. Am devoted to it.

Besides, it's eminently useful. Given a frenetic pace of life, which my sister from a more laid-back Bahrain describes as insane, the salad serves crisis resolution in answer to "Oh for God's sake why isn't there anything for dinner tonight" scenario after a long hard day at work. Sumptuous, nutritious, guilt-free, it is the very epitome of comfort food for my starving self. Love it absolutely. And it is not demanding at all unlike cumbersome, time-consuming Indian cooking. All it requires is a good pair of hands to gather all the ingredients together and toss it all heartily with gusto and verve.

I must also hastily add here that it also works wonders for an ever-expanding middle-aged waistline trying not to burst at the seams despite the best efforts and intentions at the yoga club, the gym, and the three-mile walk. The salad is a savior keeping all those sneaky stubborn oodles of fat from spilling over and tucking them in neatly instead. Not to mention, all the behind the scenes activity it silently does working on a glowing complexion, strong nails, and a crop of lustrous hair without your worrying about all those easy to forget dietary supplements,  in the process of cutting all the lethal carbs.

Whether it is a corn salad, a chopped salad, a Russian or  Greek salad,  the Italian or the Middle Eastern, Tabbouleh or the Fattoush, or the power salad especially for lunchtime kick and energy, I love them all and thank my American  Rotary hosts from Pennsylvania for introducing me for the first time to something that has ended up simplifying my life and adding color to my kitchen table and a fresh full-bodied taste to my palate in a big way. Hadn't it been for that first American experience, I would never have discovered a vital element of my everyday living today. Also, my past not-so-easy hospital experiences in and around New Jersey have taught me that this is a saving grace because most US hospital cafeterias are equipped with some of the best salad bars, and understandably so for obvious health reasons. Such variety and freedom on display is wonderfully liberating and cheering.

My salad days aren't over yet.

Kudos to a wonderful discovery that has grown on me. Life is crunchy green and full of fresh colors and thank God for that.

Comments received from Deepali M. on February 3, 2020: "Extremely well written ... Made my mouth water. Awaiting my turn to taste a salad whipped by you."

​Comments received from Susmita B. on February 8, 2020: "It is very good to see the articles published on ImmigrantBengalis.com on a regular basis. I really enjoyed My Salad Days by Vishnupriya. I could relate to it very well. Thank you for the on-line magazine." 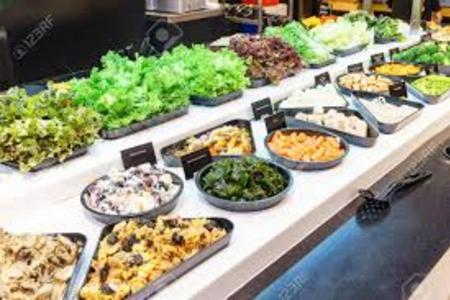