The Makings of a Successful Bengali Entrepreneur:
Face to Face with Jaiprakash Biswas 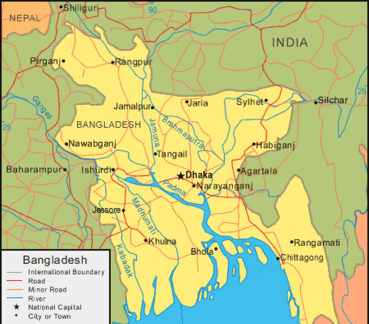 Successful Bengali businessmen are relatively rare, especially among the Bengalis living in the US. Jaiprakash Biswas of New Jersey is one such rarity. He came to America in 1998 with his wife and three small children and proceeded to expand and strengthen the garment business he had started in his home town in Bangladesh. Today he supplies over 1 million pieces of garment per month to major department stores in North America. He is also very active in supporting a number of Bengali organizations here in the US and in Bangladesh and India. The author recently met with Jaiprakash to understand the evolution of Jaiprakash as a businessman and his personal values as a family man and a philanthropist.

Debajyoti (DC): Where were you born and how did you spend your early years?
Jaiprakash (JB): I was born in Chittagong (Chattogram is the Bengali name), the second largest city in Bangladesh and the country’s largest port. I spent my school years there and graduated from Chittagong Engineering College as a mechanical engineer in 1983. Chittagong was not a very big city when I was growing up, and our family had many friends. My father was a businessman and active in community service. I had a very enjoyable early life, surrounded by family and friends. Chittagong is a nice part of Bangladesh with the Bay of Bengal on one side and the hills on the other. I loved the town. People were friendly and supported each other. They still are very warm and supportive.

DC: You were trained as a mechanical engineer, so why and how did you become a businessman?
JB: When I graduated as a mechanical engineer, Bangladesh economy was in a major recession, and the country’s president (President Ershad) had declared a wage and hiring freeze in the public sector. Jobs were scarce for engineers in the private sector, and after some searching, I found a job in a small garment manufacturing company in Chittagong. The company had 300 machines, and my job was to make sure that all the machines were in good working order. I was very busy as the only engineer in the factory and had to spend long hours. I was promoted to the position of Production Manager after a year and the work load increased even more. After another six months on the job, I got so tired that I went to the company owner and told him that I wanted to leave the company and try something different.

DC: What happened then? Did he offer you a promotion and you stayed on?
JB:  No, what happened was totally unexpected. He understood my frustrations and gave me $1200 cash (yes, in US dollars) and an airline ticket to go to Hong Kong to see if I found any interesting opportunities there, for the company and for myself! There were no strings attached, and I was very surprised. But I took up the offer and went to Hong Kong. The owner had a contact in Hong Kong, and I stayed with him. One day this gentleman took me to a big garment factory owned and operated by a Chinese company. It was quite an impressive facility, far larger and better equipped than our small factory in Chittagong. Another thing that impressed me was the number of Americans in the factory. I found out that these Americans were buyers/inspectors from large department stores in America. I was intrigued and asked if I could meet with one of these American buyers. I was given a slot at the end of a very long day to meet with Ricky, a buyer/inspector from K-Mart. Ricky had a nice personality, and once he learned that I was the production manager of a garment factory in Bangladesh, he casually asked me if I could make T shirts and what would be the price per shirt. Of course, I could make T shirts, and I gave him an estimate for the price per shirt. The price I quoted was significantly lower than what he was paying in China, so he decided to place his first “trial order” (of 4000 dozen of T-shirts) in Bangladesh with our company! I returned to my hometown and completed and shipped the order on time. That was a major turning point in my life. My responsibilities now shifted from managing production lines to leading marketing and sales efforts targeted at foreign buyers.

DC: What happened next?
JB: We shipped the K-Mart order on time, on budget and with high quality product. We went on to get larger and larger orders from K-Mart and secured trial orders from other department stores in America, including wal-mart who also placed their first Bangladesh order through me. Our company in Chittagong prospered, receiving an award as a best exporter from the Bangladesh prime minister, and I was rewarded handsomely. By 1993, the number of machines at our company increased to 10,000 (from 200 in 1983).

DC: When did you decide to start your own company and why? And how has your company evolved over the years?
JB: I decided to start my own company, Prudent International LTD, in 1994. Although I was happy and well rewarded by the owner of the company, I felt that I needed to be my own boss and try out my luck as a businessman. But I decided not be a manufacturer of garments but a marketer and distributor of garments made by others to my American customers’ specifications. I started with 4 employees, and I am happy to tell you that I now have over 170 employees in various locations. I now supply many kinds of finished garments to companies like Walmart and Sears, in addition to K-Mart. My company now oversees the production and shipment of more than 1 million finished pieces of garments per month. My manufacturing partners produce the garments at 10 different locations spread over a wide geographic area, from Bangladesh to Hong Kong to Kolkata to Bangalore. Our company has been recognized as a top vendor in childrenswear by Kmart Sears from 2013 onwards as well as for our outstanding business performance by the Bangladesh Garments Manufacturer and Exporter Association (BGMEA).

DC: You didn’t mention mainland China but I know that you go to China fairly regularly on business.
JB: Yes, I go to China several times a year. All the fabric needed for the garments, and the various trims, are sourced in China. I coordinate the sourcing efforts for all my manufacturing contractors. I am also responsible for the logistics of shipping fabrics and trims to the manufacturing partners and shipping finished garments to the customers.

DC: When did you move to the US and why?
JB: I immigrated to the US in 1998. The primary reason for my move was to give my children the best education they could possibly get. At that time the educational system in Bangladesh was not in good shape. My children were quite young. My daughter, Urna, was in 4th grade. My son, Hrid, was about three years old, and my youngest son, Mohan, was just three months old. My wife and I felt that it was better to move when they were very young, although it was quite hard to do so. Another reason was the friendship and support of an American friend who repeatedly urged me to move to the US. He even took me through all the steps in the visa application process so that I would not lose patience and give up.

DC: Was this gentleman a friend from Bangladesh who had immigrated earlier?
JB: No. He is a NY-based gentleman of Jewish faith whom I got to know through my business. Over time he became my friend and mentor. I am forever grateful to him for his advice and support on all kinds of issues.

DC: In hindsight, was your decision to move the family to the US the right one? Are you happy?
JB: Yes. I think we got the best of both worlds. My family has flourished in this country. And my business in Bangladesh and all the business and personal connections there have also prospered. After finishing her college, my daughter has joined my business and has started a garment brand of her own. My eldest son is a senior at Northwestern University in Chicago. My youngest son just finished high school at the top of his class and is going to join his brother at Northwestern in the Fall. He was the class valedictorian. My wife and I are proud of the good education all our children received here and feel that our coming to this country was the right move.

DC: Your wife, Suparna, is a physician with some foreign training to her credit. She sacrificed her professional career, moved to the US and raised the family. How does she feel?
JB: I wish you could ask her directly! I think she feels happy. Our move to the US had her full support, and she is very pleased that the children have done well. Our first goal as parents has been satisfied, thanks to her sacrifice and support.

DC: You are well-known in the New Jersey Bengali community not only as a successful businessman but also as a passionate philanthropist. You have generously supported Ananda Mandir and several other community organizations. How did you get interested in community support?
JB: My father taught me from my childhood that it is our duty to give something back to the society. He truly believed in that principle and practiced it all his life. He was a successful businessman but not a wealthy one, yet he tried to help the poor and the needy whenever possible. When an ashram in our hometown ran into financial distress, my father made it his personal mission to raise sufficient funds to put that organization on sound financial footing. He also taught us to respect honest labor – and pay all workers honest wage. His principle was “pay the worker his wage before sunset” so that he may return home satisfied and proud of his day’s work.

DC: Mohan, your youngest son, briefly mentioned in his speech at the graduation party that his grandfather had decided to use the airfare you had sent him to come to the US to benefit the ashram instead. What happened?
JB: After I established myself in the US, I wanted my father to come and spend some time with us in this country. He had never visited the US, and we were worried that he might not be able to undertake a lengthy trip if he waited any longer. So, I sent him the airfare. But at that time, the ashram suffered major damages because of torrential rain. My father decided that it would be more appropriate for him to help the organization with that money. He stayed back and took care of the necessary restoration. Because of his advancing age he did not get another chance to come and see his grandchildren. My children were sad but they learned how much their grandfather valued community work. I learned too, and I worked with my brother in Bangladesh to save an orphanage for girls in our town when their funding disappeared suddenly. That orphanage had 60 to 70 girls at that time, and now it has over 170 residents, thanks to everyone’s efforts.

DC: Thank you, Jaiprakash, and best wishes for your continued success.