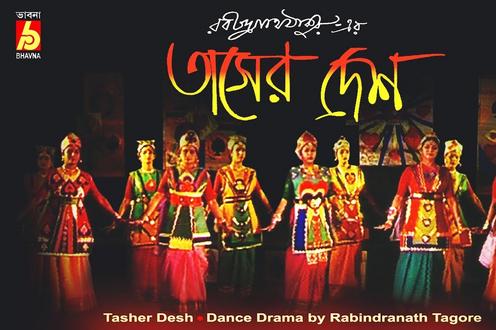 The year was 1974. I was a graduate student in Cleveland, Ohio. At that time, Cleveland was the tenth largest city in the country. Even in this large city, there were only a few Indians and fewer Bengalis at that time. It was not like today’s America, where you see many Indians and Bengalis even in small towns and cities. In Cleveland, we had a few doctors, a few engineers, and some graduate students, maybe 30 or so Bengali families in total, almost all of them in the suburbs.

Our only social connections were weekend get-togethers in somebody’s house. There was no Durga Puja or Kali Puja. We just did not have the critical mass. There were no cultural functions, or Bengali movies. In those days, nobody had heard of Netflix or YouTube; even the music CD or the video cassette recorder had not been invented. Our only sources of music were the personal collections of long-playing records or audio cassettes of some elders. And those were our only connections to “ki jadu Bangla gane” (what magic is there in the Bengali music).

In our small community, we did not have anybody with formal or informal training in music. In our social gatherings, if we could persuade somebody through repeated requests, we would get a taste of the Bangla gaan. We were indeed living in a foreign land; many of the good things that we grew up with were only distant memories.

How different is our connection to Bengal today! With the constant stream of famous visiting artists, plus all the benefits of modern technology and communication, we do not miss much of the Bengali culture -- even at such a distance. We also have the annual Banga Sammelan -- a feast of music, dance, drama, literature, and so on. For a few days, we can be completely immersed in all the blessings of our cultural heritage.

But forty-six years ago, on those rare occasions when we came to know that some famous artist was visiting America, we would try every possible means to have that precious glimpse of India personally.  I remember driving about nine hundred miles just for one evening of music with Kanika Banerjee. She was one of the most revered Rabindra Sangeet singers in our history.

The other most respected lady singer of Rabindra Sangeet was Suchitra Mitra, and the two of them were the towering figures of Tagore’s music.

Somehow, we came to know that Suchitra Mitra was visiting America. One of our senior members, we used to call him Mihirda, found out that she was in the United States with her musical team, and they were going to perform Tagore’s famous dance-drama Tasher Desh (The Land of Cards) in Detroit on a Saturday evening. Mihirda and a few others went to see the performance.

Mihirda had the chance to meet Suchitra Mitra in Detroit and was surprised to find that she was very distraught. She had taken a huge monetary risk in bringing a large team to USA; and she plaintively asked Mihirda, “I mortgaged my house in Calcutta to bring my team to America, and you guys can’t arrange one performance in your city?”

Somehow, the words hit a cord with Mihirda. He promised on the spot, without much thinking, that “Yes, we will have a performance in Cleveland”.

But it was easier said than done. First, there was the question of an available date. She was going back to India in eight days. She was already booked for a performance in Chicago the following Saturday, and that left Sunday as the only possibility. But that gave us just one week for all the preparations – booking a hall, advertising, selling tickets. And we had no experience in any of these. But Mihirda was adamant, “No matter what, we will have the performance, and if we cannot raise enough money, I will pay from my pocket”. Now, that was a strong statement.

Immediately after coming back to Cleveland, Mihirda called an emergency meeting in his house. He explained the commitment he had made, and he was looking at us to pull it off. We sat down and made a quick plan, dividing up the responsibilities – booking a hall including lighting and sound arrangements, printing promotional materials, selling tickets, transport and accommodations for all the performers.

The next morning, we all fanned out. Some graduate students, like myself, went to the Case Western Reserve University authorities and managed to get a small auditorium that could hold about 200 people for free. Some got the promotional materials and performance tickets printed in one day. But the real challenge was selling those tickets.

We put our heads together and came to the conclusion that we had to approach everybody we knew to sell tickets, whether they understood Bengali or not. So, through our connections, we approached all the Indians we knew in the greater Cleveland area. We approached our classmates, professors, and office colleagues. I sold two tickets to my classmate Sundaram and two tickets to my adviser, Professor Chandrasekhar – both from the Indian state of Tamil Nadu who did not understand a word of Bengali. We sold tickets to Americans and to other foreign students. Some were receptive; most were not. It is hard to believe, but somehow most of the tickets were sold in the short span of five days.

Mihirda was extremely happy. He gave the news to Suchitra Mitra who, of course, was elated. Mihirda gave clear instructions over the phone for coming from Chicago to his house in Cleveland.

We finalized the plans about how to handle the logistics. Suchitra Mitra and her team of about 20 people were going to have dinner after their program in Chicago. Then they would drive all night and reach Mihirda’s house by early Sunday morning. And ten young guys like me would be waiting there at 6 in the morning. As soon as the performers would arrive, we would split them into 10 groups and take them to our respective homes or apartments. There they would freshen up, eat breakfast and lunch, and we would bring them to the performance hall in the early afternoon.

Seemed like a solid plan. Early on Sunday morning, ten of us reached Mihirda’s house. But there was no sign of Suchitra Mitra and her team. In those days, there was no cell phone, or smartphone or even e-mail. In fact, internet came many years later. The only means of communication were the good old land lines. And there were plenty of public pay phones all around. We hardly see any of them these days.

We kept on waiting, and the clock was ticking. No word from Suchitra Mitra since they left Chicago at about 11 PM on Saturday night. We did not know whether they had run into any problem on the road. And we had sold nearly 200 tickets. What were we going to tell the buyers? Worry within our group was palpable. Finally, at about 8:30 AM, we got a call from a public telephone. The drivers, instead of taking I-480 from the Ohio turnpike had continued on and were going towards Akron, Ohio. A disaster indeed!

A decision was made on the spot that there was no point for them to come all the way to Mihirda’s house, there was not enough time. The new plan would be to meet them somewhere halfway and take them to our respective homes. Richmond mall, south of Cleveland, seemed like a good meeting point. We gave them the exit number, the mall was right off the freeway, and we would meet them at the Sears parking lot. The ten of us hopped into our cars and drove as fast as we could towards the Richmond mall.

A few minutes after we reached the mall, three vans pulled into the parking lot. Suchitra Mitra was in the first van and was absolutely livid. As the van door was opened, she said, “I didn’t know such idiots live in America. They do not have the slightest sense of directions”. We calmed her down by explaining the arrangements we had made. But we could see her still extremely tense.

We took the performers to our homes.  The tabla player and the lighting specialist became my responsibility. By the time we reached our tiny apartment, it was close to 11 AM. My wife had prepared some heavy brunch for them. They freshened up, ate the food, and almost immediately left for the performance hall. There was no time even for a slight rest.

Strictly as per schedule, at 3 PM, all the dancers had their costumes on, the musicians and the instrument players were ready in their places, and the program started right on time. At the beginning, Suchitra Mitra explained in English the story of Rabindranath Tagore’s “Tasher Desh”, or The Land of Cards. The story evolved around two young men, a prince and his friend, landing in an island after a shipwreck. The islanders, ruled by an iron-fisted king, had no free thinking, no freedom to act, and all aspects of their lives were governed by the strictest rules. The prince and his friend broke the shackles of the mind and body of the king’s subjects, so that the islanders could become normal again. Even the king was changed in the end.

The story line was easy to follow after it had been explained in lucid terms. Moreover, all the actors, for identifications, had life size cards in front and back. There were the king of spades, queen of hearts, nine of diamonds and so on, and the cards made the whole act easier to follow for the audience, most of whom did not understand a single Bengali word.

And what an act it was. The music, the dance, the whole composition, everything was absolutely superlative. When the program ended after one and half hours, there was a standing ovation that lasted for long. We all were so relieved -- especially Mihirda, and above all, Suchitra Mitra! After the program, I met all the families that I had sold tickets to. My Tamil friend Sundaram said that they had never seen such a beautiful performance. My adviser said that he had also liked it very much, and wished he knew a little bit of Bengali. Then he could have enjoyed the performance even more.

Overall, it was a grand success. For us, it was an exceptional treat – as if we had been thirsty for days in the middle of a desert, and we were suddenly blessed with a heavy downpour. We realized what we had been missing, and we blossomed into a new life, at least for a while.

Mihirda had arranged for dinner in his house. Finally, we had some stress-free time with Suchitra Mitra. You could not find a happier person on earth at that time. She was ebullient -- telling us her stories in America.

Then we brought our guests to our homes. The next morning, we again met at Mihirda’s place. After a hearty breakfast, we said a teary good-bye to Suchitra Mitra and her team. They left for New York where they would catch their plane to India.

The whole story may seem like an oddity in today’s world. Now we are indeed lucky: we have a choice of many cultural programs in a large and vibrant community. We also have frequent visits by famous artists, all with the benefits of more professional and less impromptu planning.  Today’s diaspora misses far less of the Indian and Bengali cultural experience. The emotional void we felt in those early days, when Indians were only trickling in, is hard to imagine by today’s youth, and it stays only in the memories of those who had lived through that period.

​Comments received from Shyam M. on August 7, 2020: "Mr.Asok Boral’s “Tagore’s Dance drama was very engrossing, kept me in suspense til the end. Thanks for sharing."