Travails of a Culinarily Challenged Student


As I prepared to leave home for the United States to pursue higher education in physics, my mother had one serious concern: how would her son feed himself and survive in an alien country?

My mom’s concern was justified. Like most boys of my generation growing up in India, I had rarely set foot in a kitchen. Naturally, I did not know even the rudiments of cooking. This in spite of the best efforts of my grandfather – yes, my grandfather! – who rightly fancied himself as an expert cook. (A high point of his cuisine was biryani made without meat (to soothe his Brahminical conscience) but with rohu fish (carp) to satisfy his non-vegetarian palate.) My grandfather bought me toy cooking utensils – pots, pans, kadai and stove made of brass rather than plastic – no doubt to encourage in me an interest in cooking. He must have been sorely disappointed to see me leave the play kitchen behind, preferring instead to run outdoors with a bat and a ball.

At any rate, my mother decided to train me in making three items as survival food: fried egg, omelet and khichuri. The first two were simple enough. As for the third, I quickly realized that however poorly I might cook the dish, a dollop of ghee would always make it savory and tasteful.

Thus armed with a very basic culinary knowledge, I arrived in Maryland as a graduate student.

Remarkably enough, in my early days and months at the University of Maryland, I had no need to make use of my mother’s training.

As luck would have it, I became the roommate of another Bengali graduate student, a few years my senior, who was an excellent cook and also a gastronome. I took full advantage of the opportunity and become his culinarily inept sidekick. Every evening, I would peel and dice potatoes, chop onions, fry them in oil (or shortening), and then turn over the cooking responsibility to my roommate. Voila! Out came delicious, mouth-watering dishes.

We went through our first semester in this fashion. I learnt to tolerate the minor burns from hot oil splattering from a saucepan or a skillet. And oh, by the way, I also cooked rice – a job that required neither talent nor mom’s training. But then, all of a sudden, the idyllic arrangement exploded.

After the first semester was over, my roommate decided (much to my chagrin) that he was spending too much time in the kitchen and it affected the time for his studies. So he came to me and announced that, henceforth, we would take turns in cooking on alternate days. The old arrangement was unfair and had to be ditched.

For me, it was a bolt from the blue. What to do now? My mother’s training was close to useless. Fried eggs and omelets were typically breakfast food. Khichuri was a possibility, but there were problems. To begin with, back in the mid-1960’s, there were absolutely no specialized stores selling Indian foods and spices. (Only a handful of Armenian grocery stores in big cities carried some of the stuff.) The only pulse (dal) available in a typical American grocery store was yellow split peas. Spices fancier that the ingredients of “curry powder,” a name I had never come across in India, were either unavailable or expensive. To top it all, mom never taught me how to heat butter slowly and turn it into clarified butter or ghee.

Then I had a bright idea. Wasn’t it a simple matter to make soup out of Campbell cans? All you had to do was to add an equal quantity of water and bring the mix to a boil. Would that not provide me with deliverance?

On my first night as a cook all by myself, I prepared rice along with Campbell’s chicken soup – the latter as a substitute for Indian curry. Then I laid out the fare on a table for my roommate and me.

It was arguably the worst dinner I have ever had!

To my surprise and relief, as we were trying to eat my own creation, my roommate kept quiet. He spoke nary a word on the woeful taste of the food that was our dinner. I thanked the Lord and eagerly looked forward to a far superior and satisfactory dinner, to be cooked by my roommate the next evening.

Imagine my horror when, the next evening, I saw my roommate take out a tin cutter and open a can of Campbell’s soup! What exactly had I hatched?

We ate dinner that night in silence. I noticed that my roommate, unlike me, did spice up the soup with salt, pepper and assorted powders (onion, garlic, ginger) so that even Campbell’s soup became somewhat acceptable as a substitute for curry. But my charade of cooking clearly could not go on. I was forced to enter the real culinary world.

I was already adept at frying potatoes and onions. It did not take me long to learn how to add pieces of meat (mainly chicken) and spices (curry powder, mainly) to the mix and then boil it with salt and water to make an approximation of chicken curry. My roommate was content, and I was relieved. But then came harassment and ridicule from unexpected quarters.

Our university of course had advanced Indian graduate students who had years of cooking experience and had become rather proficient at it. They would sometimes eat the food I had prepared and offer unsolicited critique. For example:

-- Curry powder is for sissies. You must use cumin, turmeric and coriander separately and thus develop your taste.
-- Or this: did you say you added water to chicken when you made the curry? Oh no! It is no more curry but habishyee (gruel-like food for Hindu widows).

I have never recovered from the last admonition. Even to this day, I rarely add water when cooking chicken -- preferring instead to depend on a combination of frying oil, chicken fat and juices secreted by tomatoes and other vegetables to turn into an often-delectable sauce.

Pretty soon, my survival cooking took another direction. I went beyond Campbell’s condensed soups and discovered Chef Boyardee and his brand of cooked pasta products. Many were the evenings when I was perfectly happy with dinner consisting of Chef Boyardee spaghetti and meatballs supplemented with salad. I became so confident that one time I invited some American friends and served them hot dinner based entirely on the contents of Chef Boyardee cans.

Practice, as they say, makes a man perfect. I became better over time, but never really very good. I tried my hand at cooking vegetables – slicing broccoli and cauliflower, finely (and laboriously) chopping cabbage, and so on. Trouble is, and even I could tell, everything I cooked always tasted the same. I was using the same fixed proportion of spices with each dish – vegetarian and non-vegetarian alike. The delicate art of enhancing aroma and taste, by using special seeds and herbs (phoron) with frying oil at the start and adding garam masala to the dish at the very end, forever eluded me.

Then came an unexpected breakthrough in my culinary education.

By now it was several years since I had come to America. I had just finished graduate studies and was doing research in Illinois. One of my close friends there was a Pakistani student who was about to finish graduate school. He planned to get his degree and then go back home. I happened to take him to the Pakistani consulate in Chicago for some necessary papers. There I picked up several copies of a slender book. It was the Pakistan International Airlines (PIA) Cook Book. It literally changed my life as a cook.

It is not just that the book had recipes for dishes I had never heard of, like Palak Gost and Chicken Farouque. It described their preparation in a manner that appealed instantly to a nerdy science major like me. The ingredients were listed with exactitude in terms of their weight, volume or numbers. The cooking steps were described with clarity, and the spices to be added were given with precision in terms of teaspoons and tablespoons and fractions thereof. Following the cookbook directions was to me akin to doing experiments in a Chemistry lab. Here, finally, was cooking explained in ways I could easily understand.

And the best part was that the end products were exceptionally tasty. PIA had managed to collect some of the best (and easiest) recipes for Mughlai food. Part of the reason for the exceptional taste, I later realized, was the recipes’ liberal use of butter and milk (instead of water). We were young then, and the word atherosclerosis was fortunately not yet known to me.

Epilogue: A few years later, I got married, and the responsibility for the kitchen passed on to my wife. This was not because of male chauvinism on my part; she had both interest and talent in the culinary art. Even so, on occasion when we invited friends for dinner, I would cook items from the PIA recipe book. It was droll indeed when our friends’ wives would ask me (me? moi?) for recipes of Keema Mutter or Sabzi Gost. I chuckled as I thought back on the days of Campbell’s soups and Chef Boyardee’s canned pasta dinners. 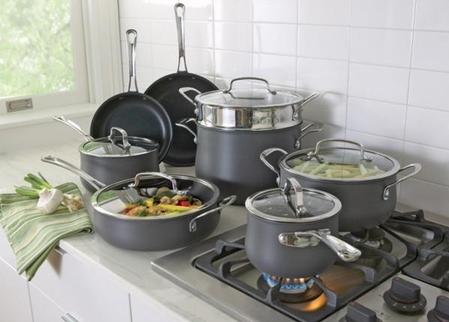