I shuddered with fear and looked through the window of the plane, but nothing was registering in my mind. Instead, I was thinking what am I going to do now? I faintly heard the stewardess announcing, “We are ready for take-off. Please fasten your seat belts.”

My husband, Ben, looked at me and said happily, “Now we are safely in the plane. If we had been five minutes later, we would have missed our flight. This is the last plane to go to Chicago this evening. I have to be back at work tomorrow morning.”

I felt like crying. I was glad to be on the plane, but how could I tell Ben that I did not have my purse with me? It contained all my identifications, including my passport, cash, traveler’s checks, driver’s license, and other belongings. Where did I leave it? As soon as I sat in my seat, having placed my suitcase in the overhead compartment, I discovered my purse was not with me. We were the last passengers to enter the plane. The stewardess greeted us saying, “I was almost going to close the door when I saw you running to get on the plane.”

At that moment, I was happy we were able to catch the plane. But now?
Ben looked at me and said, “We made it. Now, it’s my time to take a nap.”
I looked at him with watery eyes. He did not even notice.

We had waited at the wrong gate for at least half an hour when I noticed our Chicago destination was not showing up on the board. When Ben asked the attendant, she said, “You’re at the wrong gate. Go quickly to gate number 10. The plane for Chicago is about to take off.”

I hurriedly took my carry-on and ran towards gate number 10. Because of the traffic on the road, time spent to return our rented car at the airport, and a long line for security clearance, we were late to the gate.

When we finally entered the plane, I was pleased and excited. Now suddenly I felt terrible. I did not even have the courage to tell Ben that I had lost my purse.

The plane took off.   I swallowed the phlegm in my mouth.

Ben and I had both managed to earn post-graduate degrees in medicine after lengthy training.  In the early 1970s, there were no other immigrants at the place where we lived and none where Ben worked.  My husband had secured a job in a suburb of Chicago. We had worked very hard during our training and I was exhausted. So, I decided to take a short break before starting any job. We had almost no money at that time. When Ben received his first paycheck, we were glad to see some cash. Because we knew we had good prospects for earning more money in the near future, I wanted to visit Vancouver.  We had heard so much about that diverse city

When I told Ben, he said, “We are in the USA now. We should explore this country first. Why do we have to go to Canada?”  He said this in an annoyed voice.

“Vancouver is full of beauty. It is a bustling seaport surrounded by mountains. And it is also the most ethnically diverse city in Canada. Maybe we will see some Indian people there. Please let us go.”

Looking at my eager and begging face, he melted in love. He smiled a little and said, “Okay. On the long weekend coming up, we will go just for three days. We will go to California first and then go to Vancouver by a rented car. That way we’ll save some money because we would have to rent a car anyway.”

Luckily, at the last minute, we got inexpensive tickets for the two remaining seats on a flight to Vancouver through a travel agent.

Our fantastic weekend in Vancouver was indeed one to remember.  The city was clean and gorgeous -- with trees, flowers, and parks. The seafood was out of this world. As Bengalis, we were fond of eating fish. Back in India, we had fish in every day’s meal.   Now, at a restaurant in Vancouver, we had the satisfaction of eating fish once again, especially the delicious salmon. The whole trip went by amazingly fast for us, and we stayed for so long that we almost missed our flight back home.

Now, as I sat in the plane, I was choking with fear and the mental pain of having lost my purse. Being foreigners, living in the USA as exchange visitors, our passports were our only identification for staying in America.

As Ben slept, I thought how can I break the terrible news to him?  Should I wake him up? What can he do now other than feel miserable and maybe even throw a tantrum? I sat there with a despairing feeling as we were flying in the air -- leaving the beautiful city of Vancouver behind us.

I remembered my father once said, “Keep the passport with you in a safe place. It is your only identification.  It’s the most valuable document you’ll have in a foreign place.” Tears rolled down my cheeks which I wiped off.

Within a few minutes, Ben opened his eyes and moved in the chair a few times to feel comfortable and said, “I’m glad you insisted that we visit Vancouver. We had a wonderful time. Didn’t we?” He looked at me for my approval.

I stopped him, saying in a soft voice, “Yes, you did and I’m thankful to you but…”
“Again “but!” Spell it out what didn’t I do for you?” He said in a frustrated voice.
“I lost my purse with my passport in it.”
He said loudly, “You did what?” Some passengers were looking at us.

I put my hand on his knee and slapped gently to calm him down. Putting my palm of the hand on his lips to indicate not to say anything, I explained to him how, when and where I think I lost my purse, knowing fully well that was not going to solve my problem.

Ben kept on listening, and then said, “Now, we have to think, how to get you another passport. We will have to spend a lot of time and money and face a lot of hassle. I am in a lousy mood now. Don’t talk to me.”

I understood his feelings; I felt guilty and blamed myself for being such an irresponsible person.

We did not talk to one another during the entire flight. I did not even care for the drink and crackers they offered in the plane, although I was hungry. I knew Ben was also in a lousy mood.

When we arrived home, the first thing I did was to go to my bedroom and, without even thinking properly, I prayed to our Idol, our God. Being a Hindu, I prayed “My dear God, please help me to get my passport back.” After my prayer, I felt somewhat relieved. I had a strong belief; God will take care of my problem as He has the power.

Three days went by. Ben was trying to find out from others how and where I should apply for another passport. He asked his co-workers at work. I kept on praying to God. I did not have any friends in Chicago at that time as we had moved there only the previous month.

I was ashamed of my forgetfulness. My God was my only friend. There was nobody from foreign countries at Ben’s place of work. I kept myself busy by writing job applications. We almost did not talk because I knew he was worried and furious for my negligence. Ben had no time to take me for my driver’s license test. I had no valid identification to even be in the USA.

On the fourth day after our trip, I went to pick up my mail. I saw a brown envelope There was no name or address of the sender.

As it had my name on it, I opened the envelope. Inside, there was my passport, driver’s license, and a little handwritten note- I am sending your passport and your driving license because it is of no use to me. I could not send you your make-up kit or your wallet in this package as that will be more expensive to send. Sorry, I spent the money that you had in your purse as I needed it.  No name or signature was on that letter.

I was excited and felt so happy that I jumped for joy. Tears of happiness rolled down my cheeks. I hurriedly ran upstairs to go to the bedroom of our small townhouse. I put my passport and driver’s license in front of my God and said, “Thank you, God. You’re here for me.”

I called Ben from my bedroom phone. He answered in an irritated voice, “What now?” Maybe I called him during his busy time.

I could not wait to give him the news, although his manner towards me made my sense of humor disappear. I said, “You don’t have to find out how to get my passport. My passport is in my hand.”

“Because of the nicest thief in California, I got my passport and my driver’s license back. It came in the mail. I do not know who he is. I wish, I knew. I would have sent him some reward money.”

“You are damn lucky.” And he hung up.

I do not even know now, who that thief was. But I prayed to God for him. Dear God, please give this nice thief the ability to earn enough money so that he lives comfortably and never has to steal again.

My sweet mother, who did not even finish high school because of her early marriage, had plenty of wisdom. Once she told me, “Many good people steal, only because they are going through a rough time and can’t earn money because of whatever reason. They have the right to survive and live in this world as we do.” 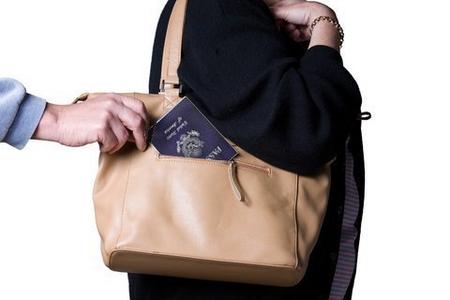