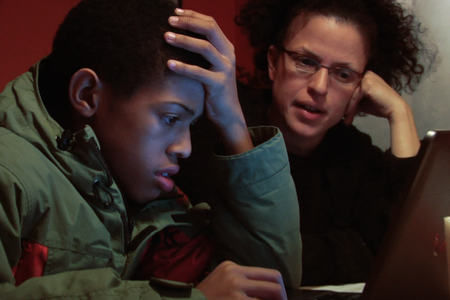 There is always the first time in every man’s life when he comes across a situation and gathers some precious experience. I got a taste of this philosophy during my brief stay in the United States in the early eighties. At that time I  received a Teaching Assistantship in Economics to pursue my Ph.D. degree from a university in Utah State. I shared my on-campus apartment with two American ladies, Marilyn and Ann, who were close to each other, and I became friendly with them. Knowing that I was engaged in a graduate course in Economics, Marilyn asked me to do her some favor. And that was to help an  undergraduate student in dealing with some problems in Statistics which she could not handle. She was not good at Mathematics, and Marilyn thought I could fill up the gap.

I agreed to that, and one day I heard a knock in my door . One young black American girl popped in, and I offered her a seat. Susan had taken up a Statistical module and her first assignment was due in two months. She opened her class lecture notes, showed me her text book and finally the problems and difficulties that bothered her. She found it very hard to follow class lectures. After browsing the structure of the module when I interviewed her, I realized that she did not possess the elementary knowledge of mathematical nicety needed to handle the module. I found it hard to put into her head the explanation of the first lecture as I decided to start from scratch. I could not rescue some lines of her lecture note from her spidery handwriting,  and when she gave a vacant look I realized that my explanation did not make any sense to her. I tried to water down the level for making it easy for her to understand -- but had no luck. I was flabbergasted as to why she had taken up this module. I asked her,  “Before selecting this course did you know about its prerequisites?” Susan said, “No Madam. as nothing like that was mentioned in the brochure except for the course materials and the credit hours.“ My next question was  “What about your classmates? Before coming to me did you approach any of them for help? Or to consult whether they could manage to cope up with the lecture materials?” Susan expressed her shyness to consult her peers lest they sensed that she was falling behind  them and so decided to cover her up.

After talking to  her for an hour, I could go deep into her mind and dig out the level of her knowledge in Mathematics. I suggested to her that she should  upgrade her understanding of the mathematical concepts  so critically needed to succeed in the course. One way for her to make up was to rummage through the library, pick up the books needed to freshen up and study on her own. She would need to work hard; otherwise trying for this module would be a sheer waste of time, money and energy. From my experience as a Lecturer in Economical Statistics in a Calcutta College, I offered her a list of books that might be of some help, and surely she could borrow them from the university library. I consoled her by saying that she was not at fault for lagging behind; rather it was the absence of the prerequisites of the module that should have been stresses to her. When two hours had passed, I told her that I had to go out. Meanwhile I prepared tea and offered her a cup. After finishing tea she was waiting for a while, and looked like brooding over something. Somewhat surprised, I asked her “Susan, do you want something? Do you want any other help?” She said smilingly “No Madam”. I smiled back and asked her what for she was waiting then? I said I was finished for that day with her when Susan replied, “I have not finished. Rather, I am waiting for a proposal.” “What is that?” I asked curiously. She said politely, “How many bucks do I have to offer you for your time with me?” I scowled at her and burst out, “You must be joking! Susan ,do you think I am hankering after money for this little help? My roommate asked me to help you and I just obeyed her wishes.”. Susan replied “ I appreciate your kindness. But you could devote these two hours by working outside which would have fetched you some dollars?” Her idea brought me to the concept of Opportunity Cost in Economics -- much discussed in Microeconomics text books.

That was the first time I came to realize that, without a doubt the Americans are very practical. I had never got the hang of a key difference: that unlike the Indian society TIME is considered as a very valuable factor in America, and that before plunging into some work or activity, people count that time in terms of dollars and cents. Susan’s proposal focussed on the practical application of the much discussed Theory of Opportunity cost in Economics.  I told her politely “The Indian city I come from has offered me enormous tuition help from my revered professors who did not take any money from me and that unlike US Universities professors are not allocated any office hours to help their students. I am the product and culture of that country  and I consider it my pleasure to help you in your critical moment." And I added, "Please feel free to drop here anytime for help if I am free.”

Susan’s eyes were full of tears at my noble words. She threw me a grateful glance. She became emotional and tears were rolling down her cheeks. She thanked me hugely and ambled away.

During my brief stay in Utah, she never turned up .I have never seen her in the University campus. Perhaps she could now assess herself and was working hard on brushing up rudiments of elementary statistics. Or perhaps she was hesitant to pay her second visit to me with an empty hand.